Frankel colt becomes most expensive yearling in world this year

“A magnificent looking horse by Frankel. Very hard to fault him, isn’t it? What about a million to start?”

Edmond Mahoney, the auctioneer, clearly wanted to cut to the chase when Lot 221 walked into the ring at Book 1 at Tattersalls on Wednesday.

He was initially left disappointed as the prospective buyers baulked at starting at a seven-figure sum. But five minutes later, in a hushed arena, the calm young horse, a lookalike of his Dad, had changed hands for almost £3 million (2,800,000gns) – making him the most expensive yearling sold anywhere in the world this year.

Others caught the mood with a mind-boggling £52 million spent on 144 yearlings. There's never been a day quite like it in European history.

It was Anthony Stroud who purchased the day's top-bill on behalf of Sheikh Mohammed’s Godolphin operation. Bill Farish, of Lane’s End Farm in the US, was the underbidder but shook his head when Mahoney invited him to increase the valuation to 3,000,000gns.

Farish is not the first, and won’t be the last to be overwhelmed by the Sheikh’s spending power. The boys in blue are leaving nothing behind this week and have already splashed out about £17 million.

Frankel needs no introduction but what made the Watership Down Stud-bred youngster so seductive was that his dam, So Mi Dar, winner of the Musidora in 2016 and herself from a wonderful family.

So Mi Dar is a full-sister to the European two and three-year-old champion Too Darn Hot, the young son of Dubawi who stands at Godolphin's Dalham Hall Stud in a partnership with Watership. She is also a full-sister to Lah Ti Dar, a Group Two winner and Group One-placed.

“Obviously he has got a stallion's pedigree, by Frankel out of a very very good mare by Dubawi from Watership Down's best family,” Stroud said. “He was the jewel in the crown and is an extremely nice horse.

“The price was more than I had anticipated, but the Sheikh was keen for this horse and Watership does a great job. The underbidders were strong opposition – he is an outstanding horse and he will be a very valuable horse if he is a good racehorse.”

Lot 221 was the middle leg of a big-money Frankel treble. Soon after, another of his sons, a half-brother of Broome and Point Lonsdale, was sold for £2.52 million, while earlier one of his daughters, out of Shambolic (by Shamardal), went for £1.58 million. Both were purchased by MV Magnier.

Click here to read Andy Stephens' report on Day One of Book 1. 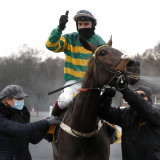