The Ladbrokes Trophy at Newbury: Runner-by-runner guide to the 18 contenders

The open nature of the £200,000 Ladbrokes Trophy on Saturday is reflected by the bookmakers going 15-2 the field.

That makes it the most open renewal since 2002 when the only runners to go off at single-figure odds were Bounce Back, who went off 13-2 favourite, and Hussard Collonges.

There have been many wonderful winners of the race over the years and my eye was drawn to four fabulous grey heroes – One Man, Teeton Mill, Suny Bay and Teeton Mill – when looking back at the Racing TV memory packages.

The silver brigade will not be represented in this weekend's 18-runner feature and history tells us that the best-handicapped horse does not always win.

Enjoy watching renewals of the Ladbrokes Trophy from the 1990s

Jodami was beaten off a rating of 141 before going on to Gold Cup glory, while serial Gold Cup runner-up Djakadam could finish only eighth in 2014 when competing off 142.

Here’s a guide to all the runners and a prediction as to where they will finish.

The 2018 Scottish Grand National runner-up won three times last season, including the Charlie Hall Chase, but he offered little when defending his title last month and looks up against it off a career-high mark. Also, all his best efforts have come on much deeper ground.

He’s only 2lb higher than when a close fourth in the Ultima Handicap Chase at Cheltenham in March, and beat all bar Cyrname in the Charlie Hall on his return. The one niggle is his jumping, at least going left-handed, which was also alarming when he schooled at Newbury’s recent gallops morning.

He’s looked a classy customer on occasions, including when dishing out a seven-length drubbing to Potterman on his return at Chepstow. Runs off a 6lb higher mark here but is 3lb well-in as the handicapper has since reassessed him. Stamina a big question mark, and not always been a strong finisher.

The latter, fourth in the Ladbrokes Trophy last year, is 25/1 with the sponsor to go 3 places better.@NewburyRacing #LadbrokesWinterCarnival 🏇 pic.twitter.com/4iYHBDTUbC

Reliability has not always been his strong suit but he is a Cheltenham Festival winner and has finished fourth in the past two renewals of this race, being beaten little more than two lengths 12 months ago on his seasonal reappearance. Demands a second look after an encouraging workout with Santini at the gallops morning.

Touched off by The Conditional in the Ultima Chase when equipped with first-time cheekpieces and has had a good prep – running well over hurdles on his return last month before having a spin here on the gallops morning. He’s 5lb higher than at Cheltenham but open to improvement over this longer trip and the headgear is back on.

Progressed well as a novice last season, looking a thorough stayer when thumping Two For Gold in the Reynoldstown at Ascot. However, he was unable to make any impact in the RSA Chase (well-held when fell last) and waved the white flag quickly when pulled up over hurdles on his return. Others are more persuasive.

He’s rising 13 and would be the oldest winner of this famous race (first run in 1957) but folly to completely dismiss him as he looked as good as ever, having had a wind op, when winning the Sodexo Gold Cup on his return at Ascot last month. Little doubt he reserve his best for that venue but was third in this three years ago.

Watch a full replay of the Charlie Hall

He’s likeable and was having only his fifth start over fences when chasing home Cyrname and Vinndication in the Charlie Halls Chase at Wetherby last time. No easy task turning the tables on the runner-up, even with a 7lb pull in the weights, and yet to prove he wants distances in excess of 3m. I can see him fading in the closing stages.

A leading novice hurdler in 2017-18 who looked to have the potential to go to the top over fences but he’s won only one of his six starts over fences and there’s a sense he is never going to quite fulfil his promise. Switch to handicaps may help but the trip also represents unknown territory.

Creditable sixth last year and was a taking winner at Kempton in February, but he was pulled up either side of that success and that does point to his in/out profile. Finished well-held behind Regal Encore on his return at Ascot and not hard to look elsewhere.

Two For Gold ran well on his return

He’s not done much wrong throughout his career and ran a satisfactory trial for this when runner-up to Hunstman Son over 2m4f at Wetherby. This sort of test promises to suit and the fact that was no match for Copperhead in the Reynoldstwon could be misleading.

Hard to fault last term, when his exploits including finishing runner-up in this and winning the Ultima at the Cheltenham Festival. Similar chance to Kildisart (second) and Vinndication (fourth) at the weights but that pair have had prep runs plus, in addition, his yard has yet to click this term.

Was preserving his 100 per cent record when making a winning debut over fences at this meeting last year but he’s not built on that and a second wind operation, before the start of this term, rings alarm bells. Well-held on his return at Wincanton and now finds himself in even deeper waters.

She was among the best staying novices around the season before last but last season did not go to script, for all she ran well on occasions, and this season has begun in similar fashion. Impossible to dismiss, though, given level of her form and fact she is 3/3 at Newbury and suited by goodish ground.

His connections harbour Grand national ambitions for him but he looks handicapped up to the hilt and got no further than the first on his return at kelso, having offered little in the National Hunt Chase at Cheltenham on his final start last season.

Consistent sort given his favoured decent ground and ran as well as he has ever done when beaten a short head in the Badger Ales at Wincanton last time. He’s 5lb well-in here as the weights for this had already been framed, and it will be a case of the better the ground the better his chance.

Lightly raced over hurdles and beat Lisnagar Oscar on his chasing debut at Chepstow last season. Has been unable to add to that tally, with headgear failing to work the oracle on a couple of occasions. Finished lame on his return at Carlisle, when behind Black Op.

Cloth Cap was third in the 2018 Scottish Grand National

Finished third in the 2019 Scottish Grand National as a novice and I’m not sure we saw the best of him in four outings on testing ground last term, albeit he ran well on occasions. Shaped well behind Frodon on his return at Cheltenham and well worth a second look here from the foot of the weights on better going.

Goodish ground looks on the cards and my 1-2-3-4 all seemed well served by that kind of surface.

Kildisart has strong form claims, remains open to improvement over long distances and looks to have had a perfect prep. With normal luck in running, he should go well.

Cloth Cap will be a danger to all with only 10st on his back, while it would be folly to ignore La Bague Au Roi, unbeaten in three starts at the track, and Potterman, who is 5lb well-in at the weights after his near-miss at Wincanton. 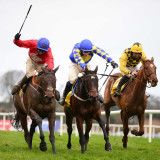 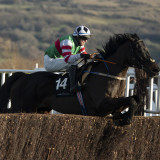