Racegoer at Cheltenham wins £182,000 after having £2 Placepot bet

One racegoer at Cheltenham on Tuesday, perhaps armed with a crystal ball, scooped £182,568 after staking £2 on the Placepot.

Remarkably, the punter had a £2 straight line bet and managed to find four winers and two seconds in the six races.

The opening day produced the second-biggest Totepool Placepot dividend of all time as one on-course customer took home a spectacular £182,567.80 for a £2 straight line bet.

Other on-course winners at Cheltenham included two customers who each collected £36.513.56 for a 40p share, having played in 10p unit stakes, while there were numerous 20p and 10p winners.

Most players were out after the Champion Hurdle, with the big three of Buveur D'Air, Apple's Jade and Laurina all disappointing.

Then the odds-in Benie Des Dieux, a banker for many, fell at the final flight in the Mares' Hurdle with victory in her grasp.

Totepool spokesman Matt Hulmes said: "We know how popular the toteplacepot is, and with dividends like this it's incredible to think this can be won without having a winner on the card. Over £1 million was bet into the toteplacepot on Tuesday.

"I'm sure plenty of those looking forward to Ladies' Day at Cheltenham tomorrow will fancy a flutter, and the toteplacepot continues to offer enjoyment and the potential to win huge sums for small stake."

Overall, bookmakers came out well on top in the first round of the war with punters on an extraordinary opening day.

The late exit of Benie Des Dieux in the OLBG Mares’ Hurdle, with the race at her mercy, summed up the afternoon for the backers.

Owner Rich Ricci apologised to those who had backed her.

The dramatic exit of the 10-11 favourite evoked memories of Annie Power in the same race four years ago that saved the layers millions, as Roksana (10-1) picked up the pieces to take the prize this time.

Nicola McGeady of Ladbrokes said: “We have dodged a real bullet today, particularly in the Mares’ Hurdle where Benie Des Dieux replicated Annie Power’s dramatic fall in 2015. The result has saved the industry millions of pounds – but it is only day one, so we won’t be counting our chickens yet.”

The day had started fairly well for punters with Willie Mullins taking the first two races with Klassical Dream (6-1) and Duc Des Genievres (5-1) before the climate changed.

The top three in the Champion Hurdle – Apple’s Jade, Laurina and Buveur D’Air – were out of it as 16-1 shot Espoir D’Allen landed the spoils for Gavin Cromwell in the Buveur D’Air colours of JP McManus.

Betway’s Alan Alger said: “The collective groan that sounded around Cheltenham as Benie Des Dieux crashed out at the last summed up the day for punters.

“After the three big guns in the Champion Hurdle all bombed out, Willie Mullins’ odds-on favourite in the following Mares’ Hurdle was the get out of jail free card that the majority of punters invested in, but it wasn’t to be.

Paddy Power spokesman Paul Binfield said: “We were fearing the worst after two Mullins’ winners, but then results turned massively in the layers’ favour and the books are well up on the first day.”

Even the victory of one market leader, A Plus Tard (5-1), could not alter the course of the day which saw other double-priced winners in Beware The Bear (10-1) and Le Breuil (14-1).

The surprise results produced a Cheltenham Festival record toteplacepot dividend, and the second biggest of all time.

Totepool spokesman Matt Hulmes said “We know how popular the toteplacepot is, and with dividends like this it’s incredible to think this can be won without having a winner on the card. Over £1million was bet into it.”

Racing TV is the only channel showing every Cheltenham race live with over 32 hours of unrivalled coverage! Click here to join now 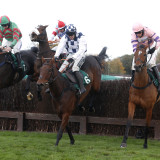 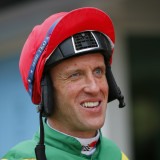 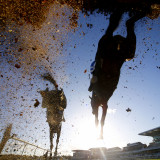 The Score's top tips for Monday: Time for a Brave bet at Leicester
News Articles