Williams will now point towards the Aintree feature on April 4 for his staying star, with Irish options also open in the build up to the four-and-a-quarter-mile showpiece.

The trainer said: “I would say we will enter him in the Grand National and that would be the main aim as you don’t get too many options now.

“We will target that and hope that the ground is on the soft side. He looks a different horse on soft ground.

“It’s all a bit manic and we will have a think now. I might enter him up in some good races off level weights in soft ground – maybe Ireland.

“I’ve never had a runner in the National before, so that will be great. He has got good tactical speed and a touch of class and he stays very well. They try and make it on the soft side there as well so he will definitely have an entry there.”

While Potters Corner won the Midlands National last term, Williams admits he had a less than ideal campaign and felt the gelding’s class proved crucial.

“The way he jumped and travelled on Friday, he just looked better than them all the whole way round. After half a mile, a friend of mine, who is a good judge, thought he was going well.

“He finished third in the Aintree bumper when Buveur D’Air was fourth, Bellshill second and Barters Hill first and he won over three miles over hurdles – a lot of those four-mile chasers wouldn’t be able to do that as they are too slow as I’ve ridden plenty of them before.”

Williams was at Newbury to saddle runners on Saturday, which meant post-race celebrations were low-key.

He said: “It was a quiet night last night as there was an early start (on Saturday). We had a few local people come into the local pub which was nice and everyone was saying well done. It was special.” 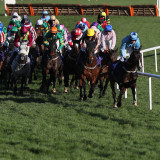