Stradivarius pulled off a dramatic piece of racing history with a memorable performance to win his fourth successive Al Shaqab Goodwood Cup - and is now set to be trained for the Prix de l'Arc de Triomphe.

Sent off the 4-7 favourite, John Gosden's brilliant stayer faced a major challenge on paper from the Royal Ascot and Irish Derby winner Santiago - as a three-year-old in receipt of 15lb.

Frankie Dettori and the three-time Ascot Gold Cup winner had plenty on their plate in the two-mile showpiece, forced into fifth on the inside of the field as several rivals came from off the pace which was set by Nayef Road and Santiago.

They managed to extricate themselves just in time, however, and Stradivarius produced a trademark change of gear to move past both big rivals in some style.

Nayef Road again had to settle for the runner-up spot, as at Ascot earlier this month, but this time was seen off by just a length - with another length and a quarter back to Santiago.

The Bjorn Nielsen-owned six-year-old is now on a collision course with equally-illustrious stablemate Enable, with Betfair and Betway making him a 14-1 chance for the Arc at ParisLongchamp in October.

"We hope to get them both there, but you know this game, there are banana skins around corners.

"He (Frankie) will sit down and work out what he's doing - I won't tell him, put it that way."

Where next? John Gosden reveals future ambitions to Tom Stanley

Reflecting on the victory, Gosden added: "It looked like he was boxed in - which maybe he was - but the key thing when you're tracking a horse like Santiago, who is in receipt of 15lb, what you must not do is attack two and a half to three furlongs down and turn it into a real slog.

"Nayef Road ran a blinder again right beside us, and I think it was right to wait. When he hits the front now he thinks that's it.

"It was a great performance under that weight."

Asked if Stradivarius could potentially stay in training next year, Gosden said: "If he goes to stud, he goes to stud. If he doesn't got to stud, I know Mr (Bjorn) Nielsen is looking at one race next year (Gold Cup at Royal Ascot).

"But you could run a mile and a half and then go to two and a half, as he is versatile."

Dettori said: "Obviously, I thought the biggest danger was Santiago, so I was trying to get behind him. Tom (Marquand, on Who Dares Wins) had the slot at the beginning, but then I managed to get behind Ryan (Moore) and I thought with a 15lb weight spread, he would try to make the most of it and probably make it a true test from four out.

"But it turned into a two-furlong sprint and for a minute I was boxed in, but if you want to sprint with Stradivarius, you've got to be pretty good.

"For a furlong he took a little bit of organising, then he was amazing - he can put two lengths on any horse in a furlong. It's amazing for a stayer.

"I really did not expect the race to turn out like that, only sprinting for two furlongs. He's so good and so versatile, he can get me out of trouble.

"You go from a superstar like Enable (in the King George at Ascot on Saturday) to an absolute champion like this horse in three days. It's the stuff of dreams."

Lydia Hislop and Eddie Fremantle give their snap reaction

As for Nayef Road, who was returned at 20-1, Charlie Johnston, assistant to his father, Mark, said: “We’ve finished second again. We were second with Dee Ex Bee last year and now we have been second with Nayef Road. I said beforehand I thought we were underestimated and it was made out as if it was a two-horse race.

"I knew coming back to two miles would help him and better ground would help him as well. He ran a great race to be beaten by the best again. We are sporting and the owner is sporting. We could have gone to the Henry II and stayed away from Stradivarius, but that is not what we are in the game for. If he goes for the races we want to go for, so be it.

“We will look at Doncaster and going back to Ascot again later in the year. He has finished second in two Group Ones on his last two starts and it would be nice to win a Group One with him.” 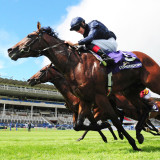