Godolphin’s Native Trail has been named as champion juvenile for 2021 – bookending an amazing year for his trainer Charlie Appleby.

Native Trail went through his two-year-old campaign unbeaten, winning the National Stakes at the Curragh and the Dewhurst Stakes at Newmarket.

By topping the standings, Native Trail becomes the eighth consecutive winner of the Dewhurst to do so.

Native Trail has been given a rating of 122, and according to the official figures he is 7lb clear of the chasing pack, which includes his stable mate Coroebus. However, his mark is slightly below this century’s average peak figure of 123.

Appleby enjoyed an incredible season in 2021, with Adayar winning the Derby and King George VI And Queen Elizabeth Stakes, Hurricane Lane landing the Irish Derby, Grand Prix de Paris and St Leger and Creative Force providing him with a winner on Champions Day, plus three winners at the Breeders’ Cup meeting.

BHA handicapper Graeme Smith said: “Native Trail is a worthy Champion, having been one of the star performers of an incredible year for his stable. His performance in the National Stakes was very impressive and in following up with victory in the Dewhurst Stakes, he confirmed himself a colt of high quality.

“That said, 2021 cannot be described as a vintage year for two-year-olds in terms of performance ratings. A total of 42 horses have made this list and only once, when there were 40 in 2019, have there been fewer, so we can deduce that talent was quite thinly spread at the top end last year.”

O’Brien’s Luxembourg came out as the best Irish-trained colt, having won the Futurity Trophy at Doncaster, one of several rated 115.

Irish handicapper Garry O’Gorman said: “I don’t think you can knock him, he’s unbeaten, and he’s got genuine aspirations for the Guineas and the Derby.”

O’Brien issued upbeat bulletins regarding his main 1000 and 2000 Guineas contenders shortly after the ratings were revealed.

Tenebrism made an impressive winning debut at Naas in March then returned from 181 days off the track to claim a Group One on just her second start at Newmarket.

O’Brien said: “We were happy enough, they (last year’s juveniles) started nice and the likes of Tenebrism finished well.

“She’ll head down the Guineas route. Looking at her in the Cheveley Park as a two-year-old, you’d think there was a good chance of her staying seven furlongs and if she could do that at two, there’s a good chance she might get a mile at three.”

Luxembourg is unbeaten in three, having also won a Killarney maiden and the Beresford Stakes, which has a rich history.

“Luxembourg is straightforward and he’ll be trained for the Classics. He’ll be on the Guineas programme and we’ll see after that. Everything is going to plan so far,” said O’Brien.

“Along with Point Lonsdale, they were the most precocious at two and you’d imagine they should get middle distances at three.

“There aren’t too many races for the horses before the Guineas. We have the trials at Leopardstown and we often use it for those which are not as exposed and we use it for experience. The Craven and those other races just come a bit close.”

O’Brien also spoke highly of Tuesday, a once-raced maiden who is a full-sister to Minding. She was beaten a short head by Discoveries on her only outing.

“This filly was more forward as a two-year-old than her sister, but she was a late foal which was why she has changed so much physically,” he said.

“We always thought a lot of her and everything she did at home was very nice. It is an advantage she’s had a run and might not be a disadvantage that she is still a maiden.” 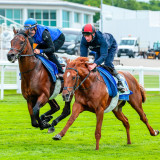