Inspiral and Frankie Dettori bounced back to winning ways with a fine performance in the Prix Jacques le Marois at Deauville.

The daughter of Frankel was the undoubted star juvenile filly of last season, winning each of her four starts, but missed the early part of the current campaign after reportedly being slow to come to hand.

And while she looked better than ever when trouncing her rivals on her belated return in the Coronation Stakes at Royal Ascot, John and Thady Gosden’s charge suffered a shock defeat when the 1-7 favourite to follow up in the Falmouth at Newmarket last month, meaning she headed for France with a point to prove.

Settled in midfield for much of the way while the Irish pair of Order Of Australia and State Of Rest forced the pace along with Japan’s Bathrat Leon, 7-4 chance Inspiral had to be niggled along to make inroads but did respond to Dettori’s urgings to grab the lead.

Jean-Claude Rouget’s previously unbeaten colt Erevann and the David Simcock-trained Light Infantry proved her most persistent challengers as the post loomed, but Inspiral stuck to her task to see off the former and claim her third Group One victory.

The disappointment of the race was undoubtedly Coroebus. Having been last early on, William Buick looked to be delivering the 2000 Guineas and St James’s Palace Stakes winner with a serious challenge a furlong down, but his effort petered out and he was ultimately well held in fifth place.

Dettori was winning his seventh Marois, and his third in a row following the back-to-back victories of Inspiral’s former stablemate Palace Pier.

He told Sky Sports Racing: “We were scratching our heads after Newmarket after an amazing performance in the Coronation.

“Today she was taking on Guineas winners and older horses and showed she’s a true champion. I’m pleased she’s bounced back to her very best.

“We went extremely fast throughout. She’s a filly that you need to know and when she wanted to go, she’s the kind of filly you don’t want to disappoint.

“I hit the front with plenty of time left, but John thinks she can get a little bit further, so I wasn’t afraid about getting to the line.

“She was champion two-year-old and apart from the blip at Newmarket she hasn’t done much wrong.”

Simcock was understandably thrilled with the performance of Light Infantry, who will now be prepared for a trip to Australia.

“I’m very proud of the horse and very pleased. He had a gallop to run at today, which was good, and he’s run his heart out and run a personal best,” said the trainer.

“I’m just happy that we’ve got here and run well and picked up a nice prize. Onwards and upwards.”

He added: “The likelihood is that he’ll go straight to the Golden Eagle in Sydney now in October. That will be his last run of the year and then he’ll come back.” 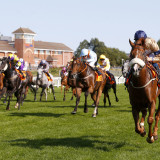