Philip Hobbs is confident the stiff nature of Sandown’s finish will play to the strengths of Defi Du Seuil in a mouthwatering renewal of the Betfair Tingle Creek Chase.

Already a dual Cheltenham Festival winner, Defi Du Seuil steps into the big league this weekend – in his first Grade One in open company.

He beat one of his main market rivals, Politologue, on his return to action at Cheltenham, showing a decisive turn of foot – but must meet Paul Nicholls’ grey on 3lb worse terms on Saturday.

Hobbs said: “He won the Scilly Isles Chase there (Sandown) over two and a half miles. Very soft ground would have been in our favour – because if it is very soft it would be more of a test over two miles.

“I always think that Sandown is a stiffer track than Cheltenham.

“From the Pond fence to the line, it is a real test of stamina, so it should suit him better than Cheltenham – and he managed to win at Cheltenham over two miles, so it should be more in his favour.

“He was as fit as we could get him before Cheltenham. Most horses improve a bit for their first run of the season. I don’t think there was a lot left to work on, I wouldn’t want to be running him in Graded races when he is three-quarters fit – and he was very fit.

“He certainly might of come on a little bit, but I don’t expect massive improvement after that.”

Paul Nicholls and Harry Cobden assess the chances of Politologue

Jockey Barry Geraghty, in his blog for SportingIndex, said: "Philip Hobbs’ horses are absolutely flying at the moment, and the same can hopefully be said for Defi who won well at Cheltenham last time.

"He should improve for the run, particularly his jumping which will hopefully be a little slicker as he gave his fences plenty of air last time. If anything, it’s just a bit of over exuberance as his technique is very good and he’s improved a lot since last season.

"However, we are now worse off at the weights with Politologue and he’s stepping up in company, so he’ll have to put his best foot forward to see off the likes of him as well as Un De Sceaux, a Tingle Creek and multiple Grade 1 winner. He’s the one we have to beat in my eyes."

He added: "Moscow Flyer and Sprinter Sacre were my other winners of the Tingle Creek and Defi isn’t at that level yet, but he was a very good novice last season and he’s started this campaign well.

"He’s a horse we’ve always loved and held in very high regard, so we’re hoping he’s going to take us on a journey."

Nicholls hopes the swing at the weights and the presence of confirmed front-runner Un De Sceaux will enable Politologue to turn the form around.

The champion trainer said: “We are 3lb better off with Defi Du Seuil, and hopefully they will go a better gallop. You never know what will happen, because it is a different race on a different day. He will definitely run well.

“He ran very well at Cheltenham, because he had to do all his own donkey work and they sprinted from the back of the last, and he was giving weight to the winner.”

Jockey Harry Cobden was pleased with Politologue in the Shloer Chase, and expects an improved display.

“I was delighted with him at Cheltenham,” he said.

“Making the running wasn’t ideal for him – he is a better horse with a lead. I think he will come on a good bit for the run, and it was a fantastic prep for the Tingle Creek. He only got out-sprinted by Defi Du Seuil.

“He is very good around Sandown – he jumps for fun around there. I think he will put up a bold performance and won’t be far away.”

Colm O’Connell, son of Un De Sceaux’s owner Edward O’Connell, is hoping to see more rain for the 2016 winner and last year’s runner-up, who is trained by Willie Mullins.

“Those tracks with deep winter ground – I’ve always said his perfect conditions are when it’s just about unraceable, he just loves it.

“Our expectations are lower than normal. He’s not an eight-year-old, and this isn’t a stepping stone to the Champion Chase – this probably is our Champion Chase, to be honest.”

Un De Sceaux won the Boylesports Champion Chase at Punchestown in his last outing at the end of April.

O’Connell added: “(Jockey) Paul (Townend) knows him better now – he got a good tune out of him in Punchestown.

“All the big three want soft ground, and the other two want us to set a decent pace – but they want to be careful what they wish for!

“Politologue has won this before, and Defi Du Seuil looked good at Cheltenham – if he reproduces that he should be odds on, but you just never know.

“You’ve the big three, Waiting Patiently, Sceau Royal – every trainer will talk them up and with good reason, because they are all top-class horses. It’s a championship race.”

Alan King’s Sceau Royal briefly looked like springing a shock in the Champion Chase in March, before being reeled in by Altior and Politologue.

“He’s been ready to run for about a month -the plan was always to go for the Shloer, but the ground went heavy,” said King.

“He’s taking on race-fit rivals, but he’s in great form, and I think he’ll run well. It’s a hell of a race – it’s a wonderful contest.

“The ground will be fine for him, because he’s fine on soft. Last year it went heavy, and he can’t operate on that. We’ve got to get him out – it’s December.”

Henry de Bromhead, who struck in 2011 with Sizing Europe, saddles Ornua – who was a Grade One winner as a novice.

“Ornua is absolutely super at home and ran a nice race behind Cilaos Emery in the Poplar Chase at Naas on his reappearance,” he said.

“We were delighted with the way he progressed last season, and hopefully he can make a smooth transition into open company now.

“The Tingle Creek has been the aim since Naas, and he finished a fine second behind Dynamite Dollars at the track last year.”

The field  is completed by Nicky Henderson’s Haldon Gold Cup winner Janika and another proven Grade One performer, in Ruth Jefferson’s Waiting Patiently.

Click here for a runner-by-runner guide to the Tingle Creek with a rating out of five for each contender. 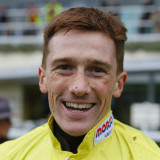 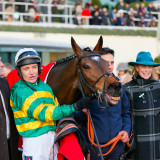 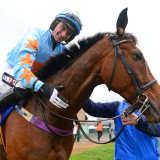 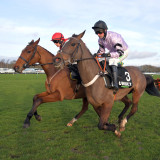