Owner Graham Wylie is hoping Bellshill can become a serious contender for the Magners Gold Cup at Cheltenham.

The eight-year-old, trained by Willie Mullins, signed off in the spring with victory in the Punchestown Gold Cup and is set to return to action next month, possibly in the John Durkan Memorial Chase back on that course.

He had looked like winning the Irish Grand National on his penultimate start, only to put the brakes on approaching the final fence, causing some interference for which he was relegated from fourth place to fifth.

“I’m hoping he’s going to be good enough to be there for the Gold Cup this season. He comes out next month, all being well,” Wylie told At The Races.

“He’s probably my best horse right now. I’ve had good feedback from Ruby (Walsh) and Willie about how he’s getting on, so hopefully he comes out and runs a big race there.

“He’s got a high cruising speed. It was such a shame what happened in the Irish National. He was there to win it and something took his eye off the ball at the last fence and he made a mess of it. But he made up for it next time at Punchestown.

“We know he’s a good horse, we know Willie is training him for the Gold Cup, so hopefully we’ll get him there in one piece in March.” 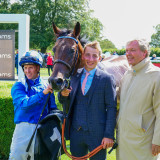