Click here for all the Betway Sweet Solera Stakes runners and riders, Timeform comments, form and the latest odds.

Fly Miss Helen bids to provide Richard Hannon’s team with a fourth victory in the Betway Sweet Solera Stakes at Newmarket on Saturday.

It is 15 years since the trainer’s father Richard senior saddled Nasheej to claim the Group Three prize, while more recently Hannon has claimed back-to-back renewals with Nations Alexander (2016) and Tajaanus (2017).

Fly Miss Helen certainly looked like a high-class filly in the making when making a successful start to her career at Newbury three weeks ago – and hopes are high that she can maintain her unbeaten record on the July Course this weekend.

Hannon said: “She’s done very well since her first run. Sean (Levey) has been riding her in a lot of her work and he’s been impressed.

“She’s a big filly who was slow to come to hand, but she showed plenty of ability from day one. She’s not flashy in her work as such, but she does it well and we’re looking forward to running her.

“This race has been a good stepping-stone for a lot of good fillies over the years.”

Fly Miss Helen is a hot favourite to see off eight rivals, with the standard set by the Mark Johnston-trained Dubai Fountain.

A winner on her Doncaster debut before following up with a runaway success at Haydock, the daughter of Teofilo was last seen filling the runner-up spot in the Star Stakes at Sandown behind Fev Rover, who had previously given Dandalla a fright in the Duchess of Cambridge.

Charlie Johnston, assistant to his father, said: “It looks a deep enough renewal. You’ve got some fillies in there who have won their maidens with plenty of potential, but in terms of form in the book, our filly is obviously right up there.

“All the signs are that she should run well. I don’t think she did a lot wrong at Sandown and the way she ran suggested there should be more to come from her, as she was still a bit green in the finish.

“Before she went to Sandown she’d won two four-runner races, so she didn’t have much experience and had no experience at all of being in a driving finish.

“The ground will be pretty quick, which is a minor concern, purely because she looked so good on soft ground at Haydock.”

Roger Varian’s Setarhe was just a neck behind Dubai Fountain in the Star Stakes and reopposes on Saturday.

Other contenders include Charlie Appleby’s course-and-distance winner Danilova and Spirit Of Bermuda, who made a winning introduction for William Haggas at Goodwood last week. 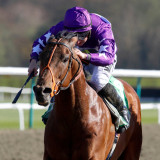