By Tom Thurgood@tdthurgood
Watch every race from the 2021 Dante Festival (May 12 - May 14) at York live on Racing TV!

This beautifully-bred filly by Galileo bids to advertise her Cazoo Oaks credentials in Wednesday’s Group Three contest. Noon Star is out of Midday, the six-time Group One winner who was beaten by a head in the Epsom Classic – as well as a winner at the Dante Festival with victory in the Middleton Stakes.

Noon Star is an enthusiastic and willing filly who finds well in the closing stages, and this step-up to an extended 12 furlongs should augur further improvement. This test looks ideal and, although she has only contested novice events so far, all three have had some kind of substance – she shaped nicely in third behind two subsequent Listed-standard fillies on debut at Salisbury, while she beat Sherbet Lemon at Wetherby last time and that horse won the Lingfield Oaks Trial last weekend.

The early market suggests Teona is the one to beat here, and despite her very short starting price, she looked very impressive on her final start last year at Newcastle. She is also very choicely bred, being by Sea The Stars out of Group One Pretty Polly winner Ambivalent. This is her turf debut, but that will be no issue and ground with likely ‘good to soft’ in the going description will suit this imposing and substantial filly perfectly.

She has been keen and green on both starts, and that’s a slight concern on her return to action against a race-fit rival.

This exciting sprinter looked very good last year, beating established Listed-class rivals on just his third career start and on his first attempt at pattern level. That Garrowby Stakes triumph came at this track and the Dutch Art colt will surely prove better this year.

A grand and imposing type, trainer Ed Walker has reported his exciting prospect has done well physically over the winter and, as he additionally gains more experience, could very feasibly end up as a Group One performer this season.

The only blot on his CV so far was on British Champions Day on his final start of last season, when he was unable to perform on the testing ground.

The four-year-old reportedly wants quick conditions and the ground on the Knavesmire will not prove optimal, with the going on Monday morning described as good, good to soft in places with further showers forecast before the meeting. However, he still rates a fascinating contender on his return with a view to a potential Diamond Jubilee tilt at Royal Ascot on a likely more favoured surface. Oisin Murphy takes the ride for the first time and the likes of Art Power and Group One victor Oxted should provide a proper test.

Hurricane Lane rates one of the inferiors here on the book with an official rating of 99, but this unbeaten colt could still have Derby pretensions and conditions in the Dante could prove ideal.

Very impressive on his sole juvenile start at Newmarket, he was sure to do better at three given his pedigree and substantial physical frame and he made the perfect start to his campaign last month in a warm conditions event at Newbury. Making all at that track is not a mean feat second-time out, and he was only given one flick in what was actually a pretty cosy victory. The race already has substance, most notably the fourth, River Alwen, landing a Newmarket handicap next time from a mark of 96.

Like many Frankels, he looks a potentially strong stayer but he also has boot – he went through the gears at Newbury under a typically good front-running ride from William Buick and clocked 11-second furlongs, according to the on-screen sectionals.

Whether this imposing type would relish Epsom is contestable, but ground with some give on the Knavesmire over a staying ten furlongs should really suit. He is fancied to go pretty well against some more established rivals, including Group One winner Gear Up and Beresford scorer, and long-time ante-post Derby favourite, High Definition.

Another blueblood set for the Knavesmire this week, this filly is by Frankel out of 1000 Guineas and Coronation Stakes winner Sky Lantern and contests Listed level for the first-time after a very impressive victory in novice company at Newbury.

While she made quite an impression on the track, trainer Richard Hannon did not dampen enthusiasm with his post-race comments, readily indicating that it would be no surprise to him if this filly proved to be top class and fancying a crack at the 1000 Guineas.

That has been and gone now and this filly can’t emulate her mother with Classic victory, but lining up in Group One company at Royal Ascot is still possible. While it’s not necessarily ‘sport’ to say so, my feeling is bypassing the Newmarket Classic was the right decision at this early stage of her career and that such a decision can reap rewards later in the campaign.

This exciting stayer has made a fine start to the campaign and he can make it a hat-trick of victories this term in the Group Two prize.

His successful return in the Further Flight Stakes in April has worked out very nicely, with runner-up Ocean Wind giving Stradivarius a decent race in the Sagaro Stakes at Ascot next time. The third in that Nottingham Listed contest was Raymond Tusk, who ran a blinder in second at 40/1 from a mark off 99 when second behind the very promising Ilaraab on the first day of the Dante Festival.

Sir Ron Priestley is still fairly unexposed as a stayer having run over 1m6f or further on four occasions. His only defeat over the distance was his second behind Logician in the St Leger two years ago.

The five-year-old has to give away a 3lb penalty to his rivals, but the overall substance of his form this season, his current career-best form and his lightly-raced profile with the prospect of more to come mostly allays those concerns.

He should improve, but Santiago was ultimately disappointing on his return in the Vintage Cropb at Navan and he might want softer ground. Nayef Road is likeable and consistent, but his overall career strike-rate does not rank near that of his better fancied stablemate.

Keep an eye on the pace here, which could be genrous despite the five-runner field. Both Sir Ron Priestley and Nayef Road like to go forward, while the long-absent Wells Farhh Go has often made the running too. 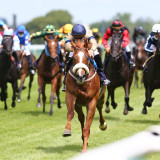