Finley Marsh banned after betting more than £5,000 on races

A golden rule for jockeys is that they must never bet on any race to maintain the integrity of the sport but it was revealed that Marsh, employed by Hughes since he was a teenager in 2015, placed 119 wagers totalling more than £5,000 during a 16-month period between early March 2018 and mid-July 2019.

His bets with Betway, Coral and Paddy Power were always win or each-way in nature, ranging from singles to multiples. None were ever to lay horses to lose. Andrew Howell, representing the BHA, said there had been no manipulation or influencing of races and that Marsh represented “a low risk to the integrity of horse racing”.

The 22-year-old, who has had 94 winners from more than 800 rides since 2017, admitted some his bets impacted on his riding in that, if anything, he was guilty of trying too hard on them.

Marsh’s bets ranged from as little as 47 pence up to £500 on Stradivarius winning the Goodwood Cup in 2018. Several of them were on horses he was riding himself or trained by Hughes. In total, he lost £114 on his three accounts – incurring losses of £384 when placing 28 bets on horses trained by Hughes.

It was a £50 bet by Marsh on Sendeed in an 11-furlong handicap at Windsor on July 15, 2019, that triggered a BHA investigation which uncovered his betting history. The 5-4 favourite, trained by Saeed bin Suroor, finished third. The jockey admitted being in breach of the rules and co-operated fully.

But his betting on races, including in Ireland and Australia, were revealed to have been merely the tip of the iceberg as, by his own admission, he had become addicted to online casino games. Any winnings on horses were apparently quickly lost at virtual roulette tables. He never withdrew any of his winnings, it was claimed, and he was left with undisclosed amounts of debt.

He had opened the betting accounts in the first place to play at the casinos. His original intention had not been to bet on horses, which he knew was against the rules for him. Rory Mac Neice, the solicitor representing him, said: "This is a sad case of a young man who has grappled with an addiction."

The investigation into his betting activity has been a prolonged process, extended by issues caused by the coronavirus pandemic. Marsh last rode in a race almost a year to the day and it will be at least until the spring before he is able to return as the independent Panel banned him for a further six months.

Tim Charlton, the panel chairman, said: "The rule which says jockeys must not bet on horseracing is an important and a critical one." He said a one-year ban would have been appropriate, but reduced it to take account of the fact Marsh had been living as if already banned since late May.

Marsh had lost his riding licence before that May date for another misdemeanour, when skipping riding at Kempton because he knew BHA drug testers were on site. In March, when that penalty was confirmed, Marsh confessed to deliberately dodging the testers having taken cocaine a couple of days earlier.

Gambling Self-Exclusion Scheme (GAMSTOP), the PJA, Sporting Chance, founded by former Arsenal and England defender Tony Adams, and Dr Duncan Law, a renowned psychologist, have all helped Marsh and are continuing to help him.

But none have seemingly been more supportive than Hughes, who spoke candidly about his own alcohol addiction, and painted a picture of Marsh being a model employee who he would continue to support.

“Finley Marsh came to me as a young man six years ago and he was a very hard-working boy from the very start,” Hughes said from the office of his Lambourn yard. “When all this came about there was no one shocked more than me about the allegations of betting.

“Normally, when you’d be galloping horses in the morning, if you did have a bit of Smart Alec in the yard trying to find out if there where was one any good or not, you would soon see that they were doing more work than you would have asked the lads to do. I've never seen that [with Marsh]. When I go on my holidays and I ask Finley to gallop a horse only I know it's done with the right intent and not to find out how good it is. I’ve never seen any tell-tale signs - that he was working [the horses] to make money gambling.

“Since what's happened, Finley has been in my yard every day for the last year. Weekends off he's voluntarily come in to ride out and he seems to be over his troubles, I hope.”

Hughes was a sublime talent in the saddle who was champion on three occasions before turning to training. But he had his own demons to conquer, and still does.

“When I was a jockey my go-to, so to speak, was alcohol. I became a practising alcoholic while I was riding,” he said. “That was my “out” from the wasting. It's not an excuse but that’s the one I found and unfortunately Finley found one in gambling, which doesn't coincide with the rules.

“I got help with my alcohol problem and to this day I still work strenuously on it. With my experience through alcohol I was probably able to help Finley quite a lot as in taking things a day at a time. Every morning he comes into the yard [it’s a case of] ‘It’s a new day Finley, don't worry, everything is alright’. When the news broke we were very concerned about him - about his mental health. We moved him in with the secretary who kindly brought him under her wing and fed him properly and kept a very close eye on him for a number of months.

“He's an integral part of our team. We like Finley as a young man. There's no malice in him at all. I think Finley had an illness, the same illness I had with alcohol. I can understand that. Unfortunately, it went against the rules of racing and I'm sure Finley is totally aware that I don't accept anyone gambling when you are a jockey.

“I don't think he was trying to be clever in any way in working in the yard and trying to find out if a horse was any good or not. The fact he was having bets in Australia . . . you know, anything that moved he seemed to be betting on. This was an illness with Finley.”

Fast-forwarding to the present day, Hughes added: “He seems to have got himself sorted and he has a good network around him. He appears to be doing everything in his power to be a better human being and getting over his illness. I just can't speak highly enough of this work ethic. He wants to become a good jockey and I’m fully supportive.

“He's got his diet in very good order at the moment. When he was going through his troubles, he was having a lot of weight troubles – it was yo-yoing up and down. I know more than anyone about that and I turned out to alcohol at the time and Finley, as an escape mechanism, turned to gambling.

“We have regular chats every week about how is wellbeing is, so I'm pretty sure Finley Marsh is in a very stable condition at the moment and I can't see why that would change as long as he continues to get the help he needs.”

Hughes went on to describe an owners’ day at his yard last week.

“My owners know why Finley isn’t riding at the moment,” he said. “A number came up to me afterwards saying ‘I hope Finley gets his gets his life in order - what a nice young man’. He was pulling horses out when all the other lads had gone home; talking to the owners; getting their trust. He’s just a nice, hard-working lad trying to get his troubles behind him and I will continue to support Finley in any way I can. Please God, this will not come back to haunt him.

“My alcohol addiction is 15 years behind me and I'd like to think there's no reason why Finley cannot do the same with his gambling addiction.”

Asked about the nature of his work at the yard, Hughes said: “He’s not on any fancy pedestal, that is for sure. From the time he has lost his licence, he has worked as a stable lad. And as a stable lad he’s coming in before everyone else and is the last one to leave. He's going the extra mile. He likes keeping busy; he's not afraid of work and he doesn't ask for anything in return.

“I find him very level at the moment and that's the kind of state of mind that we are trying to keep going forward, whether it comes with success or failure.”

Marsh had little opportunity to speak but thanked the Panel at the conclusion and said he was proud of now being "gambling-free". He has cleared his debts and also saved enough to buy a car. 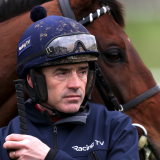