Thoroughbred Stakes: Duke Of Hazzard bosses his rivals at Goodwood

Duke Of Hazzard delighted favourite-backers with a hard-fought success in the Bonhams Thoroughbred Stakes at Goodwood.

Paul Cole’s colt won a valuable maiden at this meeting 12 months ago and returned to the Sussex Downs in fine form, following a clear-cut success at Newmarket three weeks ago.

Given a confident ride by PJ McDonald, the son of Lope De Vega travelled strongly and managed to avoid most of the trouble several of his rivals encountered during a rough race.

After being switched wide to throw down his challenge, the 3-1 chance took a while to find top gear, before charging home in the closing stages of the one-mile contest, prevailing by half a length from Turjomaan.

The well-backed Art Du Val and Royal Ascot winner Biometric both finished down the field.

Cole said: “It’s great to have another good horse again. It’s wonderful (for the owner) as there aren’t many Jim Hay’s around.

“He was going to go for a Group Three race in Deauville so that is maybe on the cards, but these are things we need to think about and discuss.

“He is a horse that can handle anything, as he is extremely tough and nothing fazes him. I think he is on the upgrade.”

McDonald said: "I think the last couple of years have been my best times down here; I've been riding for the right people and getting the right opportunities, which is what you need. Coming down here when you haven't got the ammunition is not a nice place to be - it can be very disheartening.

"Nothing really went right for me in the race. I managed to get him dropped in, which was always the plan, but the pace wasn't great me for me and you could see up the straight that everybody was tight on top of each other.

"The good thing was that my horse was travelling so well that when the gap came, I was able to take that opportunity to quicken, and he saw the trip out lovely.

"He's a horse who has just found himself again now, probably. He's always promised to be very good and I just hope he's on the right track now.

"It was a horrible race to ride in. I was always going to take my time, but this lad over-raced with me a bit today. I did not feel we went that quick and he was travelling so well up the straight that he was taking me into gaps that I did not want to be going in.

"You are just trying to manoeuvre yourself through the race as safely as possible and when you are that tight, there is not much point in shouting because there is nothing anybody can do." Placepot Pointers for the meeting at Catterick on Monday 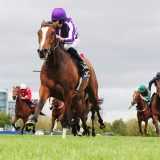