Watch a full replay of the Qipco Champion Stakes won by Cracksman at Ascot on Saturday and Lydia Hislop's interviews with John Gosden and Franki Dettori.

Cracksman lived up to the hype with a stunning display in the Qipco Champion Stakes at Ascot.

Plenty was written and said about connections deciding to skip the Prix de l'Arc de Triomphe and shunning a clash with John Gosden-trained stablemate Enable, who eventually won in great style.

And while the decision to drop back to 10 furlongs did not look sure to suit the son of Frankel, he absolutely blitzed a classy field.

Frankel won the race himself in 2010, but even he did not win by seven lengths, as the 13-8 favourite stamped his authority on the contest from some way out in the hands of Frankie Dettori.

Taking up the running just before the home straight, Dettori knew there were no stamina issues and he poured it on, with Poet's Word and Highland Reel giving game chase.

Truthfully, they were not in the same league on the day, although third-placed Highland Reel's effort in conditions he would not have appreciated can be marked up, given Ryan Moore took the longer route under the trees searching for better ground.

The race was all about Cracksman, though, and he is already 4-1 with Paddy Power for next year's Arc.

Gosden said: "He's a very talented horse, Frankie rode him positively and beautifully in the straight. We said to come wide and he has done it well. You can see why I didn't want him to run (in the Arc) - I don't know, him and Enable would be fun. There's not much between them, is there?

"It's great for Frankel to have a Group One winner in Europe, he's got that wonderful Japanese filly but he's had a proper Group One here in a race he won himself."

Dettori said: "That was amazing, it's my first Champion Stakes and he put a good field to bed in the manner of a champion. It was a fantastic feeling, I glanced at the big screen and he was clear. I've not got words to describe it, brilliant."

He went on: "We've given him time to develop, and that's what you've got now. He's been working so sweetly and he got the success that he deserved and he's Frankel's first Group One (in Europe), so it's fantastic.

"Today is Cracksman's day, let's enjoy him. If I had to choose between him and Enable I wouldn't know who to ride, they are two champions and we go into the winter to dream.

"He's learning and there's so much more to come from him."

Gosden, who also teamed up with Dettori for victory in the Queen Elizabeth II Stakes through Persuasive, likened the development of the dual Derby-placed Cracksman through the year to that of a boxer.

He said: "If he was a middleweight earlier in the season, he is a light heavyweight now. He's really progressed and to do this against older horses, he's a fast-improving horse.

"I really hope Frankie does (have a difficult decision to make between Enable and Cracksman), we hope the horses have a good winter and go through to next year, but I've been around long enough not to count too many chickens.

"I thought he'd win the race extremely well if things went right for him, but a mile and a quarter here and you have to handle the ground - I'll be absolutely honest, I didn't think he'd win as big as that."

Poet's Word was backing up his second to Decorated Knight in the Irish Champion Stakes, and his trainer Sir Michael Stoute said: "He's run well. He's pretty versatile ground-wise and trip-wise, but I don't think he wants the ground as bad as this. "I'm very pleased with him and he's been beaten by a very good one today."

Aidan O'Brien said of Highland Reel: "I'm very happy and he ran a great race. He'd like the ground quicker and he'll probably go to America (Brreders' Cup) next if everything is well." 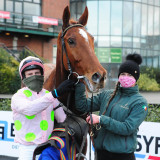 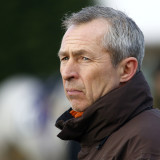