Ayr Gold Cup: Five contenders for any shortlist on Saturday

We have taken a dive into five key runners that you cannot leave off your shortlist for Saturday’s feature. Read on for our top quintet for the Ayr Gold Cup.

Great Ambassador has excelled since the switch to Ed Walker’s yard. The four-year-old has won three of his five starts for the yard and was particularly impressive when landing a Listed contest at York this month.

The son of Exceed And Excel clearly relishes quick ground and now has to deal with a 5lb rise. However, he is clearly progressing at a rate of knots and has to be on your shortlist.

He is the general 5-1 favourite and with a dry weather forecast throughout the week, he looks sure to play a leading role.

Commanche Falls is bidding to back up his victory in the Stewards’ Cup and this has been the long-term plan for Michael Dods’ charge.

Now on a career-high mark of 105, Commanche Falls showed an excellent turn of foot to land the big prize at Goodwood. Whilst that win came on softer ground, he also boasts winning form on a better surface and, given his upward progression this term, he is another who looks sure to feature in the finish.

Fans of the Ken Bruce show on Radio 2 will be willing this horse to do the business. A classy, if mercurial individual, he has recorded two victories this season and arguably produced his best performance when powering to success at Ascot last time out.

The three-year-old clearly relishes quick ground and the track at Ayr might also play to his strengths. He is now on a career-high rating of 102 and is clearly open to any amount of improvement.

Although this is his stiffest test to date in a competitive handicap, he looks sure to give his running.

Ostilio caught the eye in the Beverley Bullet last time out

Ostilio looks to be a fascinating runner. The six-year-old was a very smart individual for Simon Crisford who followed up victory in the Britannia Handicap at Royal Ascot in 2018 with success in a Group Two at Longchamp later that year.

Bought for 90,000gns by Midgley in 2020, the son of New Approach had failed to land a blow in his first eight starts for the yard but showed signs of a revival when an eye-catching fourth in the Beverley Bullet last month.

Held up towards the finish, Ostilio made pleasing headway in the final furlong and stuck to his task well. If he can repeat that effort, he has live claims of getting involved in this event.

Just Frank was an easy winner at Thirsk in August

Just Frank is a really likeable individual who has won over £100,000 during his career. He has returned to form with a vengeance in the second-half of the season and seemed to relish the drop back to six furlongs when a very smooth winner at Thirsk on his latest start.

That plainly looks like his preferred trip given two of his three career wins have come at this distance. The three-year-old is now up on a mark of 102, but he remains unexposed and open to plenty more improvement.

He will also enjoy the quick ground, which is expected at Ayr this week. 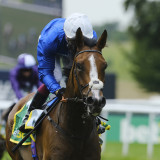