Watch a full reply of how Angels Breath made a successful debut under rules and watch what Nicky Henderson had to say to Lydia Hislop about his success.

Angels Breath justified his tall reputation with an impressive display in the Sky Bet Supreme Trial at Ascot.

The Irish point-to-point winner was a heavily-backed favourite to make a winning debut under rules at Cheltenham last week – only to be withdrawn on account of unsuitable ground.

He was instead pitched in at the deep end in a Grade Two better known as the Kennel Gate Novices’ Hurdle and the fact he was a 6-4 favourite to see off more experienced rivals was perhaps indicative of the regard in which he is held by Nicky Henderson.

Just four hurdles were jumped after the flights in the straight were taken out due to the prevailing high winds.

Nico de Boinville settled Angels Breath on the heels of the leaders for much of the two-mile journey, with Danny Kirwan and Harry Cobden setting a sedate pace in front.

Danny Kirwan remained in the lead rounding the home bend, but Angels Breath was moving powerfully in his slipstream and comfortably stretched clear to score by four and a half lengths.

Henderson said: “At Cheltenham the ground was a bit on the quick side and then after the first race today it looked horrible.

“I spoke to the owners (Dai Walters and Ronnie Bartlett) and they said ‘do what you want to do’. I said we should probably take him out, but we had to get him out there.

“We’ve always thought he was good and he looked very good in his point-to-point.

“We were bringing him back to two miles, but he is a twomiler and has always looked like one at home.

“I think there is a fair bit of improvement to come. He got a lovely tow into the race from the big horse in front.

“I’ve got to say even I thought he was impressive.”

Angels Breath was cut to a best-priced 12-1 for the Supreme Novices’ Hurdle at Cheltenham in March, making him the second-favourite behind the Willie Mullins-trained Annamix.

Assessing his strong team of novice hurdlers, Henderson added: “It’s a nice problem to have and they will all have to sort themselves out. This horse is a two miler, I’m sure.

“Rathhill could go for the Tolworth and that might be quick enough for this horse.

“We’ll have to sort it out later on. We’ll find somewhere to go.” 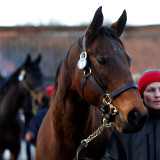