Based in Dubai in the United Arab Emirates, Meydan is an extremely futuristic-looking racecourse that has even been used as a Star Trek filming location. It has the distinction of having the longest grandstand in the world, and can accommodate 60,000 spectators.

The Meydan track is a left-handed oval with chutes provided for various distances (see map). The Tapeta all-weather surface was replaced by dirt before the 2014/15 season; it is just under 9f in circumference with a 2f home straight. The turf course sits outside the dirt track and is 1½m in distance with a slightly longer run-in. Both courses are essentially flat, though the bends are banked, and both are very wide and fair, too.

Meydan racecourse replaced Nad Al Sheba as Dubai’s main horse racing venue when it opened in 2010, and today it offers a full season of events from October to April every year. With an enormous prize pot of $35 million on Dubai World Cup night, Meydan’s main event is often referred to as ‘the World’s richest race day’ and naturally draws top equine talent from all over the globe.

The Dubai World Cup was originally launched in 1996 and quickly drew international attention, with the American horse Cigar winning the first race by less than one length and becoming the world’s highest stakes-winning racehorse at the time.

Meydan is also home to the Dubai World Cup Carnival - an international showcase held on a series of consecutive Thursdays from January up until the Super Saturday in March. 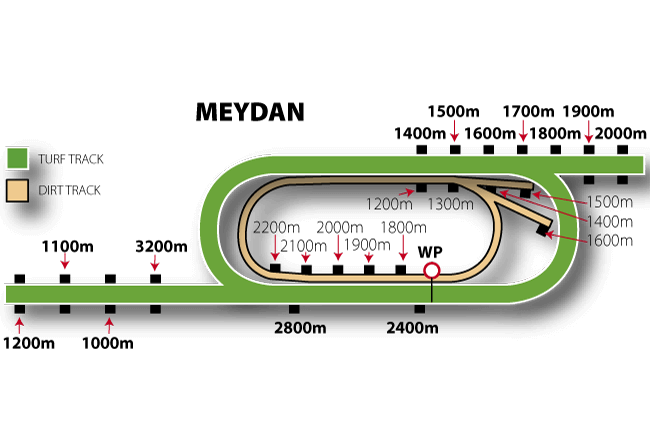