Right handed, undulating. There are two bends; all races up to a mile and a quarter use the lower bend, and in excess of eleven furlongs use the top bend. Although there is a five-furlong run-in from the top bend, the turns and the pronounced downhill gradients make Goodwood essentially a sharp track, favouring handy types, particularly in the shorter-distance races. The five-furlong course is one of the fastest in the country, meaning speedy sorts often have an advantage. A notoriously tricky course, those held up regularly meet trouble in the straight, particularly when kept to the rail.

Every summer it is the location of the meeting affectionately known as Glorious Goodwood (officially the Qatar Goodwood Festival), during which time three Group 1 races (the Sussex Stakes, the Goodwood Cup and the Nassau Stakes) are held along with the Steward’s Cup.

Glorious Goodwood has long attracted scores of eager visitors to the venue, including many famous historical figures - at one point in the nineteenth century, King Edward VII immortally described it as “a garden party with racing tacked on”. Today, more than 100,000 racegoers attend the festival each year - which is to say nothing of the crowds drawn by the other fixtures in the season.

Owned by the Duke of Richmond’s family, this West Sussex flat course is situated five miles from Chichester in the rolling green hills of Sussex.

With a long tradition of racing at Goodwood stretching back to 1802, the racecourse offers guests a beautiful day out at a venue steeped in history. 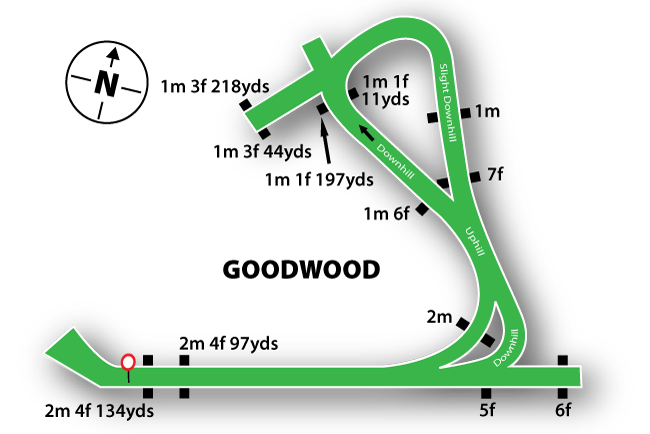 FlatChaseHurdleNHF
News Articles
Racing resumption: Kempton meeting on Tuesday attracts mammoth 454 entries
Racing resumption: William Buick eager to get back to the daily routine
Under The Stars primed to take her chance in 1000 Guineas at Newmarket
Betslip
JoinLogin
DepositLogout