The Curragh is a horseshoe shaped, right-handed racecourse with no sharp bends over two miles, with a straight run-in of three furlongs slightly uphill. There are starts at five furlongs, six furlongs, six furlongs 63 yards, seven furlongs and a mile on a straight course. A high draw provides a slight advantage on the straight course in big fields, though in any given instance pace and positional bias usually counts for more.

ABOUT: As Ireland’s premier flat racecourse, the Curragh has hosted racing since at least the early 1700s, and takes its name from an old Gaelic word meaning “place of the running horse”. Located in County Kildare, the grasslands of the Curragh Plains enjoy legal protection under the National Monuments Act, being listed as a recorded monument.

The Curragh is Ireland’s premier flat racecourse. The surface is the one most people want to race on. It has a straight six furlongs with an extension to a mile featuring a slight dog-leg. It hosts Ireland’s five Classics and has been recently redeveloped. As a racetrack, by all accounts and listening to my flat colleagues, they say it’s a wonderful track to ride. 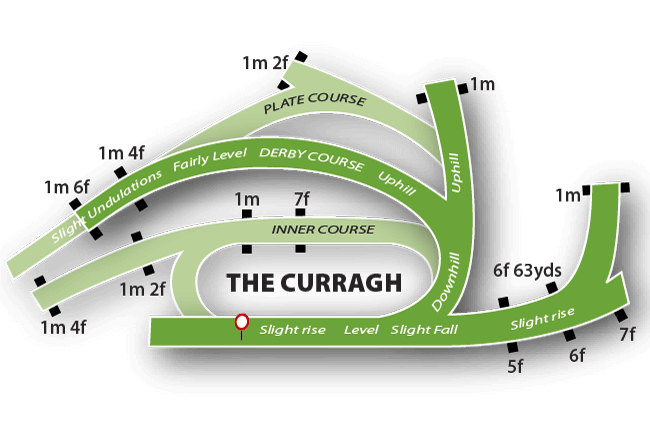 Johnny Ward's top tips for day one of the Listowel Festival