The 2021 Betfair Hurdle: Five contenders for any shortlist in the Newbury feature

The rescheduled Betfair Super Sunday at Newbury is the highlight on Racing TV this weekend, and we have selected five horses to note in the prestigious handicap. Enjoy all the action live on Racing TV.

The £125,000 Grade Three Betfair Hurdle is the centrepiece of the rescheduled Betfair Super Sunday at Newbury this weekend, while we're also set to see some stars in action, including Champ, Clan Des Obeaux and Lostintranslation.

First run in 1963, the Betfair Hurdle boasts an illustrious roll of honour. Persian War in 1968 and Make A Stand in 1997 followed up victory in the extended two-mile event with success in the Champion Hurdle the following month.

This year’s renewal looks another fascinating contest and we’ve picked out five horses for any shortlist.

Bet £20 on the @BetfairRacing Exchange across UK/Ire racing & get a £10 free bet on the Cheltenham Festival every Saturday!

Five-pound claimer Kevin Brogan has created a big impression this season, and the rising star is set for the biggest ride of his career aboard Buzz on Sunday.

Nicky Henderson's consistent grey was last seen finishing runner-up in the Betfair Exhange Trophy at Ascot under top weight, and a repeat performance is sure to see him go close here, with Brogan's 5lb claim negotiating Buzz's 4lb rise following his performance last time out.

Henderson has won the Betfair Hurdle five times, and is also set to run Mister Coffey who is the mount of Nico de Boinville.

A horse who has arguably failed to live up to his potential thus far. Sixth behind Shishkin in the Supreme Novices’ Hurdle at Cheltenham, the Kayf Tara gelding shaped well in the Greatwood Hurdle on his return to action before failing to take to fences when unseating his rider at Doncaster in December.

Connections aborted a chasing campaign and he looked back to somewhere near his best when scoring at Market Rasen over hurdles last time. That win came on heavy ground and proved that he can handle testing conditions. Highly regarded, he looks an interesting each-way player.

Owner Harry Redknapp thinks Shakem Up’Arry has the attitude of Tottenham and England skipper Harry Kane – he will be hoping he has his ability too.

Ben Pauling has made no secret of his admiration for this horse and he recorded a first win on his seasonal debut at Ffos Las in November.

Fourth in a competitive handicap at Haydock in November, he filled the runner-up spot behind Metier in the Tolworth Hurdle last time and he already has proven form in a big-field handicap.

He looks a cracking each-way bet.

He was strongly fancied for last year’s renewal and was travelling powerfully when brought down at the final flight. Yet to be asked a question, he looked sure to play a major part in the finish.

Not seen again last term after that fall, connections decided to go chasing at the beginning of this season. After two tame efforts, he regained the winning groove back over hurdles at Wincanton last time out.

Interestingly, he comes into this race off a 1lb lower mark than in 2020 and is another with a penchant for heavy ground. It is easy to forget that he was a Listed winner over hurdles and is capable of further improvement.

A progressive type for Gary Moore who carries the same colours as stable star Goshen.

Placed on his first two starts for the Sussex trainer, Fifty Ball has created good impressions in two starts since. He backed up victory at Ascot in November with a striking success at Sandown in December and has been given a break since by his astute trainer.

The six-year-old relishes a battle and also boasts winning form on testing ground, which could prove pivotal on Saturday. Moreover, his trainer has won this event with three unexposed types in Heathcote (2007), Wingman (2008) and Violet Dancer (2015). 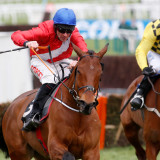