Some racehorses are remembered for their wonderful exploits, others for their longevity, many for their character and a few for infamous defeats.

Stradivarius ticked all those boxes and many more during a career that included dizzy highs, occasional lows and huge dollops of mesmerising theatre. He was a stayer quite like no other who will be remembered with affection for ever more, regardless of how he fares in his second vocation as a stallion at the National Stud.

The eight-year-old’s retirement, announced on Monday morning, came six years after making his debut in a backend maiden at Nottingham. He would subsequently run 34 more times and win 20 of them, earning more than £5 million in prize-money and bonuses for his proud connections.

His owner/breeder Bjorn Nielsen told Nick Luck’s Daily Podcast: “He took slightly longer to get over that foot bruising that he had when he was withdrawn on the morning of the Lonsdale.

“It would be hard to get him back now for Champions Day and John just thought it would be unfair really to put him through it again as a nine-year-old next year.

“He’s been the soundest horse – he’s never been medicated, he’d never missed an engagement in his career (through injury) and now to start training him with something that’s kind of there that wasn’t there before, it’s time to draw stumps.”

He added: “He’s had a fabulous career, he’s never – pardon the pun – put a foot wrong. He went out there beaten a neck at Goodwood. He ran a great race and he’s gone out at the top.

“I never wanted to see this horse finish running in fifth or sixth somewhere in a race next year, I’d much prefer to see him go out on a high. Of course I would love to see him go on for another eight years, but I think it’s time and time for him to see if he can produce anything near himself in the next few years, which I certainly hope he can.

“He will go to the National Stud and we’re very much looking forward to that. His soundness has been one of his great assets. Having a sound horse is half the battle really, a horse that you can train and he’s certainly been that throughout. His tremendous will to win, his presence and he actually is a very fast horse.

“His times over the last two or three furlongs on all those big race days is very often the fastest of the day. He runs fast times and has a great ability to quicken, so I think all those things are attributes that any breeder would want to breed to. Hopefully he is going to get the support he deserves.”

His CV is decorated like few others before him. In addition to three Gold Cup triumphs at Royal Ascot, he won a record-breaking four Goodwood Cups, three Yorkshire Cups, three Lonsdale Cups, two Doncaster Cups, a British Champions Long Distance Cup, a Sagaro Stakes, plus a Queen’s Vase. Not to mention the hearts of all racing fans.

The 35 races that annually fall under the umbrella of the Qipco British Champions Series are recognised as the best of the best. Stradivarius won 15 of them, a feat that perhaps will never be bettered.

His blend of stamina and speed set him apart, particularly when Weatherbys Hamilton decided to launch an initiative in 2018 and 2019 that would reward winners of a series of certain races a £1 million bonus.

Many scoffed at the seven-figure carrot on offer, as no horse had previously won the programme of prizes that needed to be accumulated. But trainer John Gosden and Nielsen sniffed an opportunity.

Stradivarius pulled off the feat not once, but twice, during a glorious ten-race winning sequence when he was invincible, and in the process provided every stable lad and lass at the yard of John and Thady Gosden in Newmarket with a welcome windfall.

We were all richer for being in Stradivarius’s presence. In addition to being a superstar on the track, he was playful off it – renowned for often walking around Clarehaven on two legs, or three if he got a whiff of a filly or mare. Stradivarus certainly didn’t leave much to the imagination on many occasions at the racecourse for breeders considering using his future services.

“Stradivarius has been the most extraordinary and unique racehorse throughout his career," Gosden said. "He exhibited joy in his training and has given enormous pleasure to everyone, both on and off the track.

“His constitution has been a marvel to behold and his exciting style of travelling easily in a race, and then quickening to pounce, reflected his character.

“He goes to stud with an amazing race record and enormous affection. To train he has been a complete joy to all of us here. He will remain close to home and is already looking forward to his new career.”

At times, Stradivarius got Frankie Dettori out of trouble with his potent turn of foot. But there were also occasional days that ended in recrimination and fingers being pointed.

Dettori perhaps over-complicated things on occasions and lost the ride on him this summer after his much-debated defeat in the Gold Cup, when a staying-on third behind Kyprios.

Fittingly, Stradivarius's last appearance, when seeking a fifth Goodwood Cup, was another blockbuster. Momentarily, he had victory in his grasp but then he had it snatched away from him by Kyprios, a horse who has taken his baton as champion stayer but not even born when his older rival was first hitting the heights. 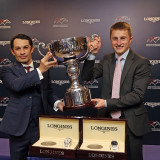 Lydia Hislop's Road To Cheltenham: Star quality on show at Sandown
News Articles
Ferny Hollow ruled out for another season due to tendon injury
Cheltenham Friday card given green light after second inspection