All you need to know about the Johnny Henderson Grand Annual Chase at Cheltenham Racecourse on Wednesday 16 March.

When and where can I watch the Grand Annual? 4.15pm on Wednesday 16 March, live on Racing TV.

15 of the past 18 winners had run at the Cheltenham Festival before, and seven of the last 17 winners ran in the previous renewal of the Grand Annual.

Arriving here on the back of a great performance is not so important, with just two of the last 15 winners having scored on their previous appearance. Chosen Mate has proven a recent exception, scoring by 11 lengths on his previous start before victory in 2019 on handicap debut over fences.

Sky Pirate became the tenth novice or second-season chaser to score last year. Beware exposed runners - even if last year's winner was having his 14th start over fences! Sky Pirate was certainly unexposed at the minimum distance, a trip which proved the making of him.

Ten of the past 11 winners have all been rated between 138 and 150. Sky Pirate was a notable exception last year, carrying 11st 6lb to victory and from a mark of 152.

Leading owner JP McManus has a fantastic record in the race, having owned four winners and a further 10 placed horses. Entoucas was denied by a short head in second at 7/1 last year.

Six of the past seven winners have all arrived afer a break. Chosen Mate had been off since January before success in 2020, while the 2019 winner Croco Bay was having his first start since the end of July. Le Prezien (first start since December) Rock The World (off since October), Solar Impulse (December) and Next Sensation (November) all arrived with fresh legs.

The Johnny Henderson Grand Annual Chase has the longest history of any race at the Cheltenham Festival and is widely considered as the oldest in the British steeplechasing calendar.

It was first run at Andoversford, near Cheltenham, in April 1834 over three miles of open country. The race died out in the 1860s - like much of the jumps calendar - but was revived at the turn of the century.

Johnny Henderson’s name was added to the race title in 2005. Henderson realised in the early 1960s that there was a danger that property developers would buy Cheltenham Racecourse, so together with other Jockey Club members he formed Racecourse Holdings Trust (now known as Jockey Club Racecourses). This non-profit-making organisation raised £240,000 to purchase the racecourse and safeguard its future.

Henderson - whose son Nicky currently ranks second in the all-time list of Cheltenham Festival-winning trainers - served as patron at the course until his death in December 2003. The 2006 renewal provided an emotional success for Nicky with Greenhope.

Run over an extended two miles, the maximum field was reduced from 24 to 20 by the BHA in 2019 for safety reasons after three horses were fatally injured in the 2018 renewal.

The Grand Annual was formerly run on the Friday, as either the penultimate or final race of the Festival. From 2021, the race will now occupy an earlier slot on Wednesday.

Sky Pirate (14/1) travelled with menace and repelled the strong late challenge of Entoucas (7/1) to earn one of the few home victories at an Irish-dominated meeting for trainer Jonjo O'Neill, jockey Nick Scholfield and owner Martin Tedham.

Scholfield misses Sky Pirate's two victories earlier in the season after a prolonged spell on the sidelines with injury and this Festival success meant plenty.

“This horse has been winning – Tom Scudamore and Jonjo (O’Neill jnr) have won on him - and I can’t thank Mr (Martin) Tedham (owner) and Jonjo (senior) enough for giving me the chance today," said the rider.

The well-backed Chosen Mate (7-2F) proved all class on handicap debut over fences in more Festival success for jockey Davy Russell, while handing trainer Gordon Elliott his seventh success of the week in the penultimate event of the meeting.

Ridden with real restraint at the back of the field off a good pace, the seven-year-old didn't jump so smoothly early on but as he warmed up he travelled into the race with menace under an ice-cool Russell. Despite hesitating at the final fence, he was still a length and three qurters too good for stablemate Eclair De Beaufeu (13-2) with Us And Them (10-1) three and a half lengths further away in a 1-2-3 for Ireland. Greaneteen (5-1) was fourth.

"We've had a brilliant week - unbelievable," said Elliott, who was earning a first victory in this race. The trainer collected the trophy from Nicky Henderson, who handed out the prize for the race named in honour of his father. "Nicky Henderson is one of the people you look up to and I've got an awful lot of respect for him," added Elliott.

On the horse, Russell said: "He's a very, very good jumper but we thought inexperience would catch him out today. He surprised us when he won at Gowran and every day since he's got better and better. It's hard to know how good he is, he's still a novice so we just don't know."

He added: "Since I've been able to walk and talk my dad made this out to be a magical place. I've been lucky to witness that magic."

The long-absent 12-year-old provided a fitting storyline in the Festival finale, supplying trainer Ben Case and jockey Kielan Woods with a first victory at the meeting and at a whopping 66-1.

The enthusiastic veteran was never worse than second throughout and, jumping with real fluency, took up the running at the top of the hill before the fourth last. His gallant effort looked like coming up short after the last but he rallied in fine style up the run-in to repel Bun Doran (11-1) in second and Brelan D’As in third (8-1). Forest Bihan (33-1) was fourth.

“A week ago I wasn’t sure he would get in,” said Case.

“He just runs with his heart on his sleeve and I’m thrilled. For a small yard like ours to have a horse like him, it’s great for us.

“He is 12 but he’s like a six-year-old at home. He’s been to all the festivals – Aintree, Galway, Punchestown – and to win here is fantastic.” This was a special moment too for the jockey.

“I’m so shell-shocked!” said Woods. “I’ve been dreaming of this ever since I first sat on a horse.

“What a little horse he is, he hasn’t run in nearly a year. Not many horses have their prep run around Worcester in July!”

Le Prezien was produced to perfection by Barry Geraghty to bring the curtain down on the Cheltenham Festival with victory in the Johnny Henderson Grand Annual Challenge Cup Handicap Chase.

Gino Trail set sail for home a long way out and was still in front over the last despite being hampered by loose horses.

But he had no answer to the late challenge of the JP McManus-owned Le Prezien (15-2), who powered up the hill to score by four and a half lengths. Gino Trail's trainer Kerry Lee also saddled the third Top Gamble, who was a neck away. Theinval was fourth.

Tragically, three horses lost their lives during the race, triggering an investigation. One result was the Grand Annual no longer becoming the final race of the meeting.

Sizing John had already lit up the final day of the 2017 Festival in taking the Gold Cup and there was still more to come from the seemingly unstoppable combination of Jessica Harrington and Robbie Power, who teamed up to land the closing event of the meeting.

Rock The World had not been seen since disappointing at the track in October of that season, but it was soon after that his wind was operated on, and from that point connections concocted a plan that would see the bold-jumping nine-year-old arrive at the Festival fresh and primed to the minute for his big target, as Harrington explained afterwards.

“He was fantastic, that horse. He was third last year and he had a wind op after he ran here in the autumn. I couldn’t run him at home as the ground was too heavy, so I gave him a couple of racecourse gallops.”

The champion trainer, for whom this was a 40th Festival winner, said: “Yesterday, when I was doing the declarations, I was thinking I've got to do something to get the best from this horse and decided to put the blinkers on, 10 minutes before the deadline. Sometimes you get a gut feeling and it pays off. The day before I made a pig's ear by not declaring blinkers for Arpege d'Alene [second in the Pertemps Network Final], but you don't know if that would have made the difference or not."

The 2015 renewal was renamed the AP McCoy Grand Annual as the 20-time Champion Jockey bowed out from the Festival for the final time. It was not to be a dream ending for McCoy, who could finish only fourth on the well-backed Ned Buntline (runner-up the previous season), but it did prove a perfect result for the Scudamore family, and a poignant one at that.

Next Sensation had been strongly fancied for the race 12 months earlier, where he had finished an honourable fourth, but he bounded up the Cheltenham hill this time round to score by an emphatic four lengths, drawing tears from rider Tom Scudamore after the line.

He explained: “We lost Grandad (Grand National-winning rider Michael Scudamore senior) and Grandma in a short space of each other in the summer. Grandad was an integral part of our lives. If it wasn't for him we wouldn't be here, whether it be me riding or Michael training.”

The success of Tony Martin-trained Savello in 2014 completed a most extraordinary day for owners Gigginstown Stud and jockey Davy Russell.

“You wait two years for a winner at The Festival and then four come along in one day. We've got a couple of guests in our box and a couple of them have done a £2 accumulator on our horses - they've won over £150,000!”

Savello was also the last leg of a 3,926-1 treble for the jockey, who had earlier won the Gold Cup on Lord Windermere and the Albert Bartlett Novices Hurdle on Very Wood.

Alderwood’s success in 2013 proved a pivotal result in the destination of the Great Britain v Ireland Festival contest, with the teams tied at 13 winners each going into the concluding race.

Alderwood, trained by Willie Mullins, was sent off a well-backed 3-1 market leader and duly ran out a comfortable three-and-a-quarter length victor under Tony McCoy, handing team success to the Irish.

On being told that he had clinched it, Mullins said: “I should think that will be the first and only time I'll win anything for Ireland.”

Both Alderwood and runner-up Kid Cassidy carried the colours of owner J P McManus, who was asked if he was happy to win it for Ireland, to which he replied: “I'm just happy to win it!” 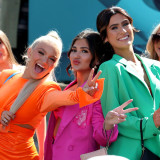