Our pundit and resident website tipster has four tips for Saturday’s high-class card at Haydock Park, headlined by the Grade One Betfair Chase. Enjoy more good racing from Punchestown and Huntingdon live on the channel.

Hurry! There's only one way to watch the Jumps season, and that’s on Racing TV. Unrivalled, expert coverage of every race live from 62 British and Irish Racecourses. Start your FREE MONTH now 👉 Click for details.

I am attracted by the double-figure odds of this improving stayer and would look to back him each-way with two really exciting and once-raced chasers Manothepeople and Your Own Story in opposition.

No Cruise Yet has got much more experience over fences and improved rapidly last season, starting off for this yard from a very low mark over fences before winning his final two races last season from 9lbs and 14lbs higher in the handicap.

Sam England’s seven-year-old was favourite in a three-horse race on his reappearance but got beat a short head, getting pipped close home after being in front a good while. He looked very much as though there was further improvement in him and, a month on from that run, I am hopeful that will be the case.

No Cruise Yet has never run a bad race since he joined this stable (certainly not the first to be improved by such a move) and off a low weight over this marathon trip he can hopefully run another good race despite being 1lb wrong at the weights.

Findthetime was backed as though he couldn’t be beaten when I put him up on his reappearance last time and, for most of his race, I thought he was going to run down Dan Skelton’s Rocky Man but just couldn’t manage the last half-furlong after the last up Wetherby’s punishing home straight. I am not the only pundit who thinks that run was a very strong effort and that both horses will be contenders in better races this winter.

Sean Quinlan did nothing wrong last time, but Brian Hughes is back on board now and won on this horse three times last season.

He improved again on his reappearance and looks a very solid option in this strong field for a trainer who is excellent at placing and preparing his horses for these big Saturday handicaps.

Good Risk At All was a useful bumper winner and took a few starts before breaking his duck over hurdles last term despite showing useful form. He won nicely in a strong race at Ascot last February and was backed into 2-1 favourite in a strong race at Carlisle last time, winning by 4 ½ lengths from Wholestone and I expect him to confirm that form despite being 6lb worse off now.

Good Risk At All has the potential to be out of handicaps before too long especially if, as expected, he proves suited by this three-mile trip. Both of his wins have come on testing ground.

Hopefully Houston will not have a problem following up on his reappearance win at Carlisle and complete a good afternoon for Nicky Richards in this competitive closing handicap.

Houston Texas was the market mover of the day last time and, despite being well behind for much of the race, made his ground up very smoothly with his rider seemingly very keen to make sure he didn’t make his move too early. Houston Texas has gone up 6lbs for a 1 ¾ lengths victory and, while that might seem harsh, it in no way reflects his superiority on the day and he looks a real improver to my eyes.

He has landed on a race full of largely useful but out of form or declining chasers and, despite being upped considerably in class, he should be able to comfortably make this grade. 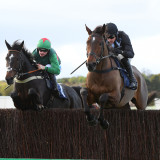 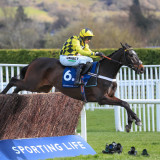 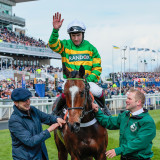