Watch what Willie Mullins had to say about his star chaser who cruised to Grade One glory in the Paddy's Rewards Club Chase.

Chacun Pour Soi produced a dominant display to rout his rivals in the Paddy’s Rewards Club Chase at Leopardstown.

Odds-on backers had their fingers burnt when the Willie Mullins-trained eight-year-old was beaten by A Plus Tard in the same race last season, but he bounced back to get the better of stable companion Min over the course and distance at the Dublin Racing Festival back in February.

He was then a late withdrawal from the Queen Mother Champion Chase at the Cheltenham Festival in March after suffering a stone bruise on the morning of the race.

But having made a smooth return in the Hilly Way Chase at Cork three weeks ago, Chacun Pour Soi was a 4-7 shot to follow up in the feature event on day two of Leopardstown’s Christmas Festival – and ultimately got the job done with relative ease.

After initially taking a lead from stable companion Annamix, Chacun Pour Soi hit the front racing down the back straight under Paul Townend, with Rachael Blackmore covering the move aboard Notebook.

However, it was clear from before the home turn that the market leader had far more to give and he galloped all the way up the straight for a six-and-a-half-length verdict.

Mullins said: “I was really pleased with that. He showed a great spring in his jumping and really attacked his fences. After the last fence, he flew around the final bend and was then idling a bit. His ears were pricked and I’d say he’d plenty in reserve.

“He’ll probably come back here for the Dublin Racing Festival. I hadn’t intended going to Mallow (Cork) with him until I saw what we had left in the John Durkan. It was a good opportunity to go to Mallow and it worked out perfectly and left him just right for today.

“It was frustrating what happened to him at Cheltenham, but these things happen with horses every day.

“We had to pull Klassical Dream out of the beginners’ chase today. I’m hoping it’s just a muscle problem and nothing too serious.” 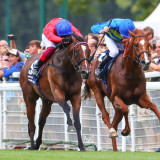 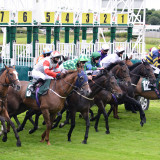