Nicky Henderson admitted on Racing UK's Luck On Sunday that he must rebuild Might Bite’s lost confidence in time for his 32Red King George VI Chase defence after a “bombshell” defeat at Haydock.

The nine-year-old was sent off the evens favourite on his seasonal reappearance in Saturday’s Grade One Betfair Chase – a race billed as the rematch between him and his Cheltenham Gold Cup conqueror Native River.

But Might Bite and Nico de Boinville could only trail in a 29-length last behind course specialist Bristol De Mai, who beat Native River four lengths into second.

Henderson reports nothing untoward has come to light in terms of significant injury, and Might Bite therefore remains on course for the King George at Kempton on Boxing Day – for which he is still a 7-2 favourite.

The Lambourn trainer said on Racing UK's weekly breakfast programme: “He’s fine. It was a bit of a bombshell, but he’s perfectly sound and bright – and there are no injuries anyway, no reason for it behind that.”

There is almost exactly a month until Might Bite must be back on his A game to see off challengers for his Christmas crown.

Henderson concedes it ‘went to pieces’ when faced with fences at Haydock which resulted in seven fallers in Saturday’s three other chase races and have attracted criticism for being, in the assessment of de Boinville, ‘too stiff and unfair’.

Might Bite trailed in last of five in the Betfair Chase

As part of the de-brief, however, Henderson has already consulted schooling and jumping guru Yogi Breisner, and is reassured about the way forward.

“Watching it again – not making excuses – I had a long chat with Yogi Breisner an hour ago, because he’s a great assessor of these things, understands what jumping is all about, there’s no doubt to me the fences were big and they were very solid,” said the champion trainer.

“You know how fluently and flowing this horse jumps, and there was no rhythm to it yesterday at all.

“I think he was just fresh and well, and bounded down to one, and it gave him a fright.

“If you go back and watch his early days when he was chasing, the first time we ran him at Cheltenham he just ballooned five fences and that was the end of it. We had to put him away for a year.”

That length of break is not an option any more.

Henderson added: “Even when he went to Ffos Las for his first novice chase, he did the same thing – and got beat.

“Then he started to get belief in himself and I’m afraid, I think (at Haydock) he just lost his own belief and lost his confidence a little bit.

“Talking to Yogi, he said you could see that he just wasn’t as fluent – he was having to work it out, and you take out a lot of mental and physical energy.

“He wasn’t tired. I just think his game had gone to pieces a little bit.”

Henderson nonetheless remains unflustered, and optimistic, having seen less than a week ago how well Might Bite can jump under jockey Noel Fehily, who was a potential injury replacement for De Boinville.

“We’ll work out together how we just put his confidence together and I’m not worried about that,” he said.

“Noel Fehily came and schooled him on Monday, and he was brilliant. But our fences aren’t quite what we were jumping yesterday.

“He’s such a good jumper. But it’s all about confidence, and I just think he lost it.” 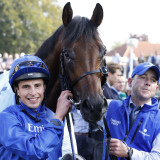