The Grand National course is triangular with its apex (at the Canal Turn) the furthest point from the stands. Inside is the easier Mildmay course which has birch fences. A major feature of the Mildmay course is its sharpness and the fences there are stiffer than used to be the case. The Randox Health Grand National is run over two complete circuits taking in sixteen spruce fences first time around and fourteen the second and still provides one of the toughest tests ever devised for horse and rider. Since 2013, the run to the first fence in the Grand National was reduced in a bid to improve safety, resulting in the overall race distance shortening from the usual 4½m, though the run-in is still 494 yards long and includes an elbow.

Aintree is home to the Grand National, the most famous race in the world which is the climax to a three-day Festival meeting in April every year. The racecourse hosts five other fixtures and is a leading conference centre in the north west of England.

Aintree is part of The Jockey Club which has been at the heart of British racing for more than 260 years. The Jockey Club is the largest commercial group in the sport, and runs the largest racecourse group in the UK by attendances, total prize money, contribution to prize money and quality racing and more than 3,000 acres of world-class training grounds in Newmarket, Lambourn and Epsom Downs; the National Stud breeding enterprise and education provider; and the charity for racing's people in need, Racing Welfare. Governed by Royal Charter with Her Majesty The Queen as its Patron, every penny The Jockey Club makes it puts back into British racing.

Set over two courses, the Grand National and Mildmay courses, Aintree represents a serious test. The Grand National course is set over two circuits of the track and a total of four miles four furlongs, and represents the most challenging jumps race for horse and rider. It is set over 30 unique spruce-covered fences including the Chair, Becher's Brook and the Canal Turn. These fences have changed a lot in recent times, but require a good brave jumper. Getting your mount into a good rhythm early on is really important and key to a successful spin around the national course round the inside of the hurdles track which are both flat and sharp. Fences come thick and fast and there are no hiding places on this speed oriented track. It suits strong travellers as a general rule. 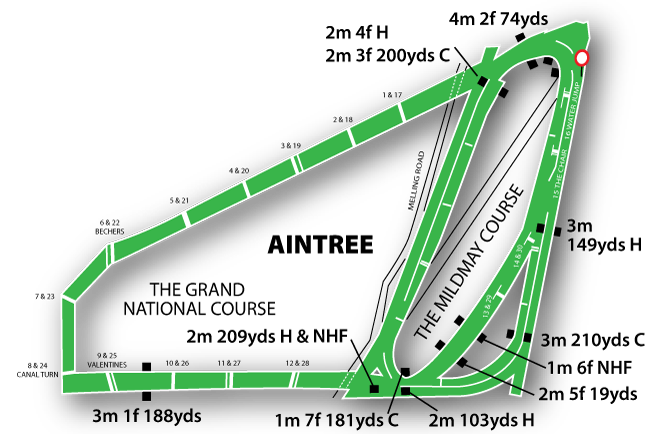