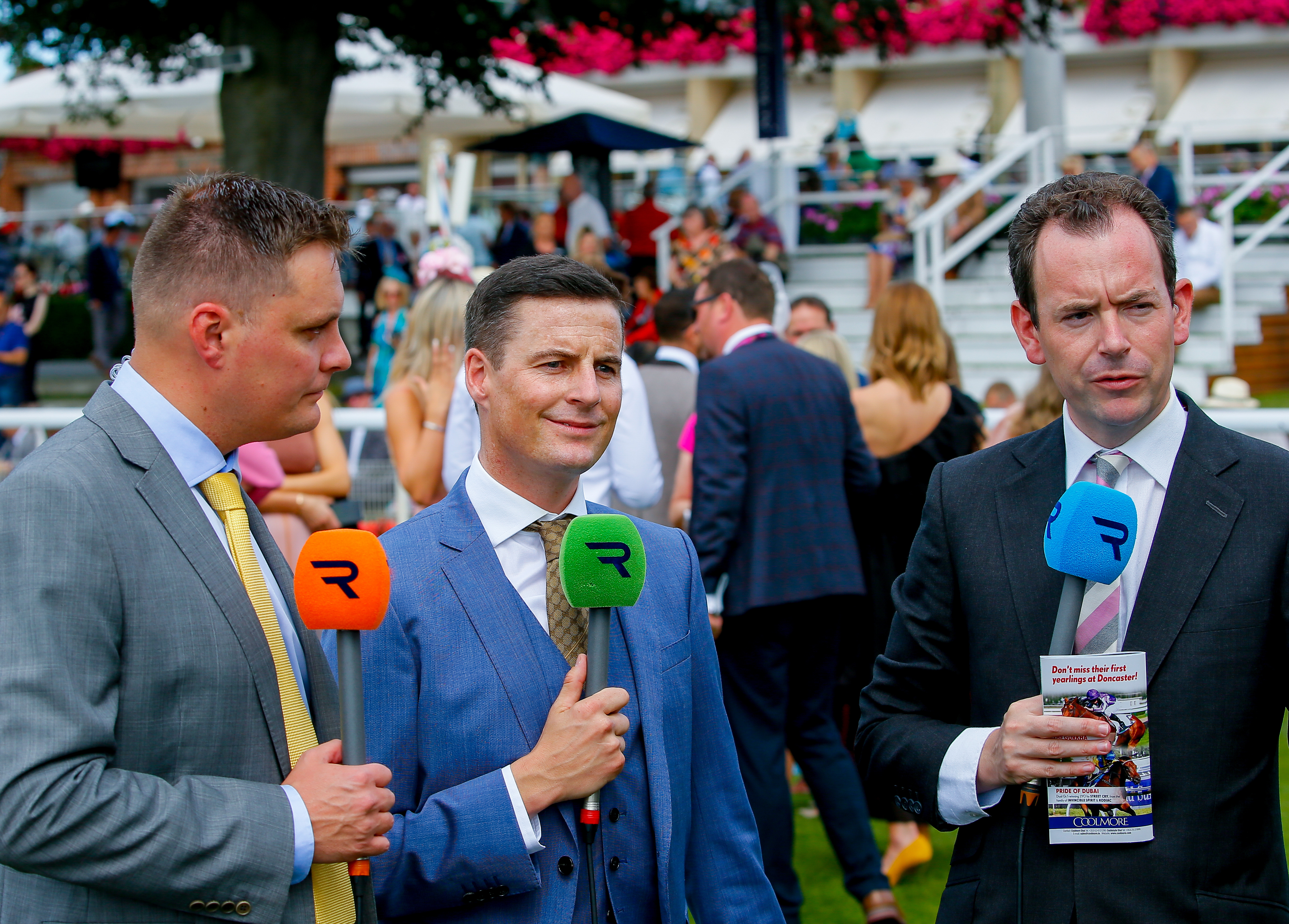 Listen to all of the latest Racing TV Podcasts below

It's finally here... and it's actually happening, right? Johnny Ward and Brendan Duke are on their way to Cheltenham and the pair are joined by Bar One Racing's Peter Kingston to preview every single race at the meeting! Joseph O'Brien tells us about his running plans for... well... most of his team, while Gavin Cromwell says nothing that would put you off backing Darver Star. It's a packed episode full of idle gossip from the Cheltenham Festival preview circuit and a hatful of selections. Is Dukey ready to give up on Articulum? What do you reckon...

Ahead of the 2020 Cheltenham Festival, Nick Luck had Nicky Henderson on his show to look ahead to some of the trainer's Festival prospects.

Lydia Hislop and Ruby Walsh are at Cheltenham to unpick some of the latest clues in the Festival picture, while Lydia also gets to talk to Martin Greenwood and Andrew Meanor, the men responsible for putting the weights together for the big Festival handicap prizes. Why do Irish horses get a different mark when running over here? And which races are they most looking forward to? Finally, Ruby nominates six of his own selections for the handicaps.

Johnny and Dukey have been out on the circuit- the Cheltenham Preview Night (TM) circuit - with tales to tell from Leixlip and some exclusive, smuggled audio to boot, featuring Gordon Elliott, Eddie O'Leary and Oakley Brown, who is eyeing a big ride in the Martin Pipe. Not only do we have their naps but we have handicap naps for the Festival from The King, Kevin O'Ryan, Jane Mangan and Donn McClean - with three of them tipping the same horse! Fran Berry has his usual Dundalk lock of the week and both Dukey and Johnny have weekend fancies at Leopardstown - Dukey's local track given his admission that he, in fact, still lives with his mother.

This week's show may not have it all, but arguably it does. Johnny spent Tuesday morning at Gordon Elliott's and Wednesday's at Willie Mullins', relaying what he was told, featuring interviews with the pair as well as with their lieutenants, Busty Amond and David Casey. John Small, Dublin Gaelic football star, gives us his Joy Of Six, while we have Fran Berry giving not one nap but two this weekend. On top of all this, we talk racing welfare, and Dukey comes up with a TWENTY-letter word that even Countdown wouldn't be able to manage.

Nick Luck was joined in the Luck On Sunday studios by Sudanese refugee Abdul Musa Adam & journalist Ros Wynne-Jones, both of whom have written a book about Abdul’s incredibly powerful story of his journey from Sudan to the UK. Abdul spoke in detail about some of his experiences and his drive to find his brother Yusuf.

Who will ride Delta Work at Cheltenham? Will Tiger Roll run at Aintree? How did racing knowledge help Brendan Duke win a fiercely contested Countdown battle? It's all in Episode 13 of On The Wire, hosted by Johhny Ward. We also hear from Jack Davison and get the latest weather update from Gowran Park's Eddie Scally, as well as the best bets for the weekend action in Ireland.

Something for everyone in episode 12 of On The Wire, in association with Bar One Racing, as Johnny Ward and Brendan Duke review the highs and lows of the Dublin Racing Festival and preview the weekend action. Can Fran Berry put up another winning nap at Dundalk? What does Gavin Cromwell have planned for Darver Star and Wolf Prince after their big runs? What are Johne Murphy's horses to follow for 2020? Is Eddie O'Leary still waiting to see if the Grand National handicapper blinks first over Tiger Roll? The answers are all to be found here.

Ruby Walsh joins Lydia Hislop for a forensic examination of some of the big performances at Leopardstown's Dublin Racing Festival. What did they make of the wins of Honeysuckle, Delta Work, Faugheen, Notebook and more? And how have those races influenced possible Cheltenham Festival plans? Lydia also adds a new bet to her portfolio, while Ruby Walsh picks out two eyecatchers for the handicaps.

Brendan Duke and Johnny Ward are again joined by Gavin Lynch to discuss day two of the Dublin Racing Festival. Dukey, "a proven sire", has a strong fancy in the mares' handicap hurdle but so does Johnny; Gavin targets his winning nap in one of the Grade 1s on an incredible day's racing. Add in Henry de Bromhead, Leopardstown CEO Tim Husbands, Presenting Percy's owner Philip Reynolds and one of the most emotional commentaries ever heard at Leopardstown and you have... episode 11 of On The Wire.

The first of two episodes, focussing not only on Dundalk but primarily day one of the DRF at Leopardstown. After two winning naps last weekend, Gavin Lynch, one of the most respected voices in Irish punting, joins the team and agrees with Johnny about a strong fancy at Dundalk. Dukey is looking to a Gigginstown runner and, accordingly, we have Eddie O'Leary on to give an exclusive take on brother Michael's runners on Saturday. Philip Reynolds joins us too.

The band are back together! Lydia Hislop and Ruby Walsh are re-united, in time to unpick the impressive Galmoy Hurdle success of Benie des Dieux and the Cotswold Chase triumph of Santini. Did Lydia mention that she'd backed Santini at 33-1 for the Gold Cup? Oh yes, she did.

Benie des Dieux vs Honeysuckle, Dallas Des Pictons-gate, a chat with Jerry Hannon and all the best bets for the upcoming action at Dundalk, Fairyhouse and Naas. Johnny Ward is joined by Peter Kingston, Brendan Duke and Racing TV's Donn McClean for the latest episode of On The Wire, in association with Bar One Racing.

The latest episode of The Road To Cheltenham with Niall Hannity, Steve Mellish and Ruby Walsh. The team discuss the "freakish" talent of Goshen, the directional preferences of Real Steel and the Albert Bartlett potential of Monkfish.

Johnny Ward catches up with top jockey Rachael Blackmore to talk about some of the highlights of her season so far. Joe Chambers gives us a dark horse to follow from the Rich Ricci ranks, while Brendan Duke joins Johnny, along with Racing TV pundit Fran Berry, to give their best bets ahead of the weekend action at Dundalk, Navan and Thurles. It's all in the latest edition of On The Wire, in association with Bar One Racing.

Ruby Walsh is joined by Nick Luck for the latest edition of the Road To Cheltenham, as the pair look back upon the most important Festival clues over the last seven days including a dazzling success for Shishkin at Newbury and Andy Dufresne's Sky Bet Moscow Flyer Novice Hurdle victory.

We hear from Patrick Mullins, Sarah Lynam and Donnacha O'Brien in our weekly Irish racing podcast, sponsored by Bar One Racing. Johnny Ward is in the chair, joined by Brendan Duke. The pair preview some exciting weekend action at Dundalk, Fairyhouse and Punchestown.

Patrick Mullins joins Lydia Hislop to bring us up to date on the latest Cheltenham Festival picture and reflect upon his recent big wins on Faugheen and Sharjah. How does he them faring at Cheltenham and what's the latest news on some of the other big guns from the Willie Mullins team? Find out more.

With a look back over the best of the action from the Christmas period and a preview of the big novice hurdle at Naas, Johnny Ward and the usual crew serve up a mixture of tips and tittle-tattle, while we get an extensive update from top jockey and friend of the show, Jack Kennedy.

The Road to Cheltenham goes on the road! Lydia Hislop and Ruby Walsh were joined by Kevin O'Ryan and Jane Mangan in a special show recorded live at Leopardstown Racecourse on the final day of the Christmas Festival.

Racing TV's Donn McClean joins Johnny Ward and Brendan Duke to preview the final day of action at the Christmas meetings at Leopardstown and Limerick, while we also hear from Gordon Elliott and Lydia Hislop on a star-packed edition of On The Wire.

Henry De Bromhead talks exclusively ahead of the big Christmas action at Leopardstown and Limerick, while Johnny and Brendan also hear from Jane Mangan and HRI boss Brian Kavanagh. We also have a competition in which listeners from Ireland can win a €100 free bet, courtesy of Bar One Racing.

Robbie Power joins Lydia Hislop to discuss the recent big-race action on both sides of the Irish Sea and look forward to some of the big races over Christmas. Will Chacun Pour Soi lay down a marker for the Champion Chase in the days ahead? Lydia is hoping so... and Robbie wouldn't put her off!

In association with Bar One Racing, Johnny Ward, Brendan Duke and Peter Reynolds preview the weekend's Irish racing action and have a strong fancy for Dundalk on Friday, while they also look back upon the return to action of Presenting Percy and hear from Gigginstown manager Eddie O'Leary, getting the very latest news on Tiger Roll.

Ruby and Lydia are reunited to reflect upon all of the latest action, including Defi Du Seuil's victory in the Tingle Creek Chase and a winning performance from Min. Ruby puts up a selection for the National Hunt Chase, and the Altior debate rumbles on. It's all in the third episode of Road To Cheltenham.

Kevin O'Ryan joins Lydia Hislop in the studio, while Ruby Walsh dials in, as the trio look back upon the recent racing action, including a top-class Fairyhouse card.

Johnny Ward and Brendan Duke talk to Presenting Percy's owner Philip Reynolds, look back on the excitement from Fairyhouse last weekend, and preview the weekend's Irish racing action, including the John Durkan Chase and Hilly Way Chase. We also hear from Joseph O'Brien and Kevin Doyle.

Racing TV brings you our Irish racing Podcast in association with Bar One Racing. Johnny Ward and Brendan Duke hear from top trainer Gordon Elliott as they look forward to a big weekend of jumps racing at Fairyhouse.

Read the column? Now hear the show. Lydia Hislop is joined by Ruby Walsh for the first in the series of the 2019/20 Road To Cheltenham.

Ruby puts up a bet for Albert Bartlett Hurdle and joins Lydia unpicking the latest action and its possible repercussions for the Festival.

We're joined by Sam Turner to preview the big racing action at Newbury on Friday November 29 and Saturday November 30 - the Ladbrokes Winter Carnival!