Un De Sceaux won the Royal Salute Whisky Clarence House Chase at Ascot for the third year running as he took his Grade One tally to eight.

The Willie Mullins-trained 10-year-old shrugged his four rivals aside with a clear-cut success, even though he did not use his customary front-running tactics.

Speredek set out to stretch the field and was 12 lengths clear at one stage, but Un De Sceaux closed in turning for home when asked for his effort by Paul Townend.

The 4-9 favourite drew away from the second last after Brain Power came down.

Speredek stuck on stoutly for second place, seven lengths behind Un De Sceaux who was recording his 20th career success.

Townend said: "I rode my horse to suit him and the further we went, the more confident I was getting. It was hard work, but it was job done today.

"It's great to get the opportunity to ride these horses. I spoke to Ruby (Walsh) this morning. He's always helpful when he's on the sidelines and I'm grateful to Willie and all the owners. He has a massive heart."

Mullins watched the action from Navan and said: "To do that three years running on two different tracks on what looked very tacky ground is great.

"It looks like he's racing a lot more relaxed nowadays which means we can ride him differently. I was very happy with his jumping.

"I'd be happy enough to go back for the Ryanair Chase after what he did last year, but lets see what happens with all the other horses first.

"He's an iron horse and takes his training very seriously every morning. He's there to be shot at making the running, usually.

"We thought there might be a couple of front-runners today so Paul said he was happy enough to let them go if they wanted to, and sure enough there was a front-runner in there and it suited us."

Un De Sceaux's part-owner Colm O'Connell said: "Any time you make history, it is special. It was a magnificent performance.

"For such a front runner, to see him settle so well - it's wonderful. "It's a very special day for everyone and I'm just stuck for words really."

Nigel Hawke was understandably delighted with Speredek's first effort in such elevated company.

"It was a super run. He did everything right and you couldn't wish for more, barring a win," said the Devon trainer.

"Coming round the last bend the winner has come up to us, but one thing we were going to do was gallop to the line and, to be fair to the horse, he was still galloping.

"He hasn't got away from us and we have been beaten by one of the top horses there is and there are not many that have done that recently.

"It is very difficult finding races for him going right handed. At the end of the season you have got the Sandown race and Punchestown, but there is a good chance the ground has gone.

"If he was going to go to Cheltenham, he would have been wrapped away now and would be going for the Grand Annual. It doesn't work because of the left-handed scenario.

"Remember this horse has won over three miles. There is the Ascot race in four weeks' time (Ascot Chase) and that might just be looked at. That has been mentioned. If we ever step back up in trip, that might be it." 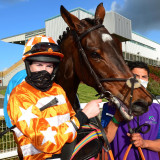