Trueshan will concede upwards of 19lb to each of his 19 rivals in the Jenningsbet Northumberland Plate at Newcastle on Saturday.

Sixth in last year’s renewal of the Gosforth Park showpiece, Alan King’s charge went on to win the Goodwood Cup, the Prix du Cadran and the Long Distance Cup on Champions Day to establish himself as one of the sport’s leading stayers.

The six-year-old looked as good as ever on his return to action at Nottingham in early April and connections had hoped to bid for Gold Cup glory at Royal Ascot last week.

But just as was the case 12 months ago, ground conditions were deemed too quick for Trueshan in Berkshire and he has been re-routed to Newcastle as a result.

King chose to claim 5lb off his stable star in the 2021 Northumberland Plate by booking Rhys Clutterbuck, but this season he will be ridden by his regular partner Hollie Doyle, meaning he will carry the welter burden of 10st 8lb.

“Trueshan seems in great from," the trainer said. "We took him to Ascot on Saturday but we didn’t get there until late and he wasn’t there very long so it didn’t take anything out of him and he worked well yesterday morning.

“It is very important to get another run into him. He hasn’t run since he won at Nottingham in April. We thought that was great that we got the season started earlier than last year but since then the ground has dried up and we have had to miss intended targets. There is never any temptation to run him on fast ground, he wouldn’t be winning these races on fast ground.

“I am a great believer in match practice with these horses. He has even more weight to carry off a higher mark of 120 than his run in this race last year, it did him no harm last year, it almost set him up for the rest of the season and that is what I am hoping for again at the weekend. It is more important he gets out there and has a proper race which will hopefully set him up for Goodwood if the rain comes or there are lots of races for him later in the year.”

Next in the list is Ed Dunlop’s Red Verdon on 9st 3lb, followed by the Hugo Palmer-trained Rajinsky, who is on the same weight less the 5lb claim of top apprentice Harry Davies.

Trueshan is one of three runners for King along with 2019 winner Who Dares Wins and Rainbow Dreamer. 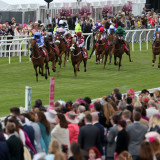 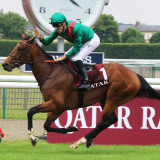 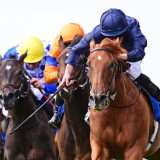