Tote Scoop6 tips: Vinndication looks to have plenty in his favour in Charlie Hall

This week’s Scoop6 is supported by Down Royal, Ascot and Wetherby and features the bet365 Charlie Hall Chase that will also contribute to the pool.

All the remaining units in last weekend’s Scoop6 were eliminated on the penultimate leg at Cheltenham meaning we have a third consecutive rollover of the win fund with £100,000-plus carried forward to this weekend’s substantial pot.

Among the five other interesting, but challenging, Scoop6 races we can look forward to is the valuable Grade Three Sodexo Gold Cup and the support of Down Royal’s Ladbrokes Champion Chase.

Below you will find my insights for each race in hope that I can point you in the direction of a winning perm. Good luck!

Not tried the NEW Tote yet? Sign up today for a £10 Risk Free bet.

We head to Ireland for the opening leg of the Scoop6 as Down Royal stage the first Grade One event of the season, the Ladbrokes Champion Chase, and a stellar field will line up.

Gordon Elliott could hold the key to this race in a bid to secure a third win in the race and he saddles more than half the field, two of which are vying for favouritism.

Presenting Percy makes his stable debut for the Elliott team having left Pat Kelly’s yard. His first-time out record reads well and he was last seen travelling noticeably well when looking to mount a serious challenge in the Gold Cup before coming to grief two fences from home, when in contention.

That form would certainly bring him right into the equation this weekend but he’s not particularly high on reliability and marginal preference is for the 170-rated DELTA WORK, who heads the market and will be looking to enhance the stable’s good record in the contest.

He is the rightful favourite having enjoyed an excellent campaign last season which saw him land two Grade One victories at Leopardstown before finishing fifth in the Cheltenham Gold Cup.

At first glance, supporters of him that day would have been slightly disappointed that he couldn’t make a much bigger impact, but it didn’t vindicate the actual race as a whole as he lacked judgement at most of his fences.

The other minor concern I have with him is that he was well beaten in this race twelve months ago and has traditionally needed his first run of the season.

He’s still only seven, though, so he’s likely to have strengthened with another season under his belt and, based on the form he’s produced so far in his career, he ought to be able to surpass last year’s reappearance and take us past this competitive opening leg.

LISNAGAR OSCAR caused a huge 50/1 shock when producing a career-best performance to win the Stayers’ Hurdle at Cheltenham when hot favourite Paisley Park could only manage seventh.

He should be set for another successful campaign and although he has to give 6Ib to the rest on his seasonal return this weekend, he looks the safest and most logical option on leg two being the top-rated runner in the field at 160 along with Rebecca Curtis’ stable among the winners recently.

I’d be hopeful that he can establish his Cheltenham success to be no fluke with a good enough performance in this Grade Two event.

The one who looks a big danger is Next Destination, formerly trained by Willie Mullins who is now with Paul Nicholls and had previously won four of his five starts over hurdles.

He’s clearly a talented but fragile sort, given the fact that he’s not been seen on track since defeating Delta Work in the Grade One Irish Daily Mirror Novice Hurdle at Punchestown in 2018.

Having said that, he’s still only eight and looks a top recruit for the former champion trainer.

He’s likely to have enough value to his name following his hefty absence, so if connections have him fit enough to do himself justice, he certainly has the form in the book to play a leading role.

Another top-quality race to solve for leg three as none of these can be firmly discounted, so it might be worth taking a chance on a couple of runners for your ticket.

KID COMMANDO was a useful bumper performer, who ran well twice at this track last season in two NH flat races and the form has been well advertised since by Soaring Glory who has recently won over hurdles and looks a smart prospect.

This six-year-old won first time out last season, so fitness-wise, that shouldn’t pose a problem. He was last seen running well to finish third in the Grade Two Dovecote Novices’ Hurdle at Kempton back in February and brings plenty of potential to the race now he goes handicapping for the first time.

His opening mark of 136 could be quite lenient from a handicapping perspective and his valuable experience on the track will stand him in good stead.

Nicky Henderson’s COUNTISTER failed to fire in a couple of hot Grade Three handicaps last season but was far from disgraced when seventh on her reappearance in last year’s Greatwood Hurdle at Cheltenham’s November meeting from a mark of 141. She was a good third in the 2019 County Hurdle at the Cheltenham Festival and will resume racing from a handy-looking mark of 135, which makes her an appealing proposition to reach the frame.

Vinndication finished fourth in the Ultima at the Festival

An exceptional renewal of the Charlie Hall Chase for leg four with the Paul Nicholls-trained Cyrname heading the market, who will make his eagerly-awaited return to action. This eight-year-old undoubtedly brings the strongest form to the race having lowered the colours of the brilliant Altior last season on his return and following an impressive victory in the Ascot Chase that earned him an official rating of 176.

On the face of it and, with clear claims on form, he is the horse to beat but his odds appear remotely short in a race that has not been great for favourites in recent years.

There also has to be an element of risk attached for more reasons than one, given his unproven stamina over three-miles alongside his best form coming on right-handed tracks, particularly at Ascot which immediately rings alarm bells in the context of Saturday’s race.

This does, however, look an ideal test to find out whether he can exhibit his talent under this weekend’s much different sceneries, but while he might just simply outclass his rivals, his last couple of performances have been a shade underwhelming and he looks opposable for Scoop6 purposes.

As can be the case for most of these, Kim Bailey’s VINNDICATION lacks a recent run, but these conditions will hold no fears and he can give the favourite most to think about. He’s won six of his ten starts in total and developed into a smart chaser last season, most notably when producing a fine weight carrying performance in defeat to finish fourth in the Ultima Handicap Chase at the Cheltenham Festival.

This improving seven-year-old’s good record fresh can provide further confidence that a big run is forthcoming, particularly with his first-time out record yielding three victories from three outings. He looks an appealing proposition to fill the frame at the very least with anticipation of more improvement to come representing his shrewd handler who has long thought of him as a future Cheltenham Gold Cup contender.

The penultimate leg of the Scoop6 is the Sodexo Gold Cup Handicap Chase, the main attraction on the card at Ascot. I have eventually whittled the field down to two, who merit consideration and are worth an investment into your perm.

Firstly, BLACK CORTON, who was third in this race last year from a 2Ib higher mark.

The Paul Nicholls-trainer runner is still only nine-years-old and is the clear top-rated in the field. Bryony Frost, his regular pilot, will partner him again this weekend. He was just over one length behind Regal Encore last year but he’s 5Ib better off this time and both arrive into the race on seasonal debut, which will provide Paul Nicholls’ charge with a decent chance of reversing the form, taking into account Black Corton’s good record fresh which is more of a plus than a negative.

Last year’s winner, Vinndication, will head to Wetherby for the Charlie Hall Chase instead, and that opens the door for this consistent nine-year-old to run another big race this weekend. Winning this race would require a career-best, but he’s one of just a few high on reliability and having undergone recent wind surgery, another bold effort is anticipated.

Another to be considered here is Henry Daly’s WHATMORE, who has sneaked in off a low weight 10-3. He didn’t do much wrong last season and was an excellent fourth at the Cheltenham Festival behind Imperial Aura last time out off this mark. He shaped encouragingly on both attempts at three-miles last season and will receive nearly two stone in weight from the top-weight. Richard Johnson will take the ride and providing he's ready to roll on his return to action, he looks sure to go well.

Of the bigger-priced runners that are intended to line up, Flying Angel could be a danger. He’s a very capable performer when on-song and although his inconsistency is there to be recognised, the handicapper has shown mercy dropping him 2Ib since last time and he makes more appeal than the formbook would indicate in this wide-open event.

A competitive field assembled for this valuable handicap prize as 20 runners are set to stand their ground and sixteen of those are set to be eliminated for the concluding leg, so it’s wise to have at least two runners going into the decider.

Alan King’s stable are going very well of late and his runner GROUP STAGE looks quite well-handicapped on a mark of 126. He was a decent juvenile last season, winning on hurdle debut finishing fourth at Cheltenham behind Botox Has and then second behind Thyme White in a listed event at Musselburgh.

The form of each race has a lot of substance to it given the winner from each race has won impressively since. This four-year-old would have needed his comeback run at Chepstow last month, where he shaped well for a long way and he will appreciate the drop down in class this weekend.

The nature of this race should really suit him with a good pace to aim at and not only does he hold a fitness edge but a strong form line courtesy of his juvenile form which has worked out well.

Coincidentally, Ben Pauling has two runners supplemented for this race with preference going to IMPERIAL KNIGHT, who will be ridden by the in-form David Bass.

He filled the frame in six of his nine starts to date and ran well when last seen to finish second at Haydock where he looked the likely winner when ridden to lead on the run-in but it’s plausible that the deep enough surface caught him out in the final stages.

The drop back down in trip along with the better ground here should suit and the assessor has only put him up 2Ib for his latest run so he merits plenty of respect. 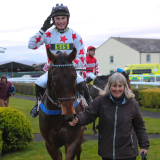