Prix de l’Arc de Triomphe hero Torquator Tasso could head for Ascot next after returning to form at Hamburg at the weekend.

Trained in Germany by Marcel Weiss, the five-year-old was a shock winner of the prestigious ParisLongchamp contest last season when prevailing by three-quarters of a length as a rank outsider among the field of 14.

Torquator Tasso returned to action at Baden-Baden in May when finishing sixth in the Group Two Grosser Preis der Badischen Wirtschaft, but at Hamburg on Saturday he was back at the mile-and-a-half trip he seems most effective over and produced a neat three-and-half-length victory under regular rider Rene Piechulek.

The success could now pave the way to the King George VI And Queen Elizabeth Stakes at Ascot on July 23, although connections would prefer to see some give in the ground before travelling.

Following Ascot – for which he is as short as 6-1 with Paddy Power and Betfair – a run on home turf is pencilled in at Baden-Baden, after which connections hope a repeat Arc bid is on the cards for the returning champion.

“We were very happy with that, he is back to his form and we were very pleased with him,” part-owner Peter-Michael Endres told the PA news agency.

“It (a mile and a half) is the best trip and it suits him.

“If the surface is OK we will go next to Ascot, the King George And Queen Elizabeth, if there was a little bit of rain in England that would be nice for us.

“If he is OK, the horse, we will go from Ascot to Baden-Baden and then back to the Arc.”

Tap the image now for your chance to win our epic Ebor package! 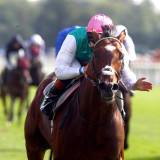