Lisnagar Oscar and Paisley Park on course for Newbury showdown

Lisnagar Oscar and Paisley Park could be set for an early-season face-off in the Ladbrokes Long Distance Hurdle at Newbury on Friday.

The Rebecca Curtis-trained Lisnagar Oscar was a shock 50-1 winner of the Stayers’ Hurdle at the Cheltenham Festival back in March and reappeared at Wetherby last month, finishing fourth in a Grade Two heat.

Paisley Park won the 2019 Stayers’ Hurdle for Emma Lavelle, but he was only seventh in his title defence, although it later emerged he had suffered from a defibrillating heart. He will be having his first start since in a race he won last year.

Summerville Boy finished fifth in the Stayers’ and he already has a win under his belt for Tom George this term, while Sam Spinner, a Grade One winner over hurdles three years ago, could revert to the smaller obstacles for Jedd O’Keeffe after being pulled up in the Charlie Hall Chase last month.

The Paul Nicholls-trained McFabulous is another leading contender with ex-Ditcheat inmate Aux Ptits Soins entered by Dan Skelton having been off the track since May 2019.

Bring home the Jumps with a free one month trial of Racing TV. Watch over 65 live meetings from Britain and Ireland on unlimited devices. Hurry, there are only a few left! Click here to get yours now! 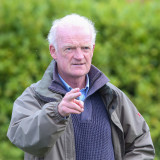 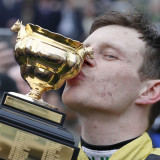