The 49-year-old landed the Winter Derby aboard Dubai Warrior and produced a front-running masterclass plus John Gosden paid tribute to his stable jockey afterwards.

Frankie Dettori transcends wins and losses. Attendance, visibility of the sport – he affects the brand. He makes the brand. There is no other in racing that can do that. And it is not even close.

Following the raw, itinerant years of his youth and then the muscular, superhero years with Sheikh Mohammed and Godolphin, Act III of Franchise Frankie has not unfolded as quietly as some expected.

The veteran moniker precedes every interview with everyone’s favourite Italian, yet at the age of 49, his skills and profile are far from in decline. He remains one of the best in the business. And to many, he still is the Racing Business.

It is easy to forget on a damp, windswept Lingfield Park on Saturday, where he began his 34th domestic season, just what Dettori achieved in the recent past.

Big moments were not in short supply last year, with Enable’s King George VI And Queen Elizabeth Stakes victory the crowning moment among a personal-best haul of 19 Group One winners in 2019.

After a busy winter, which saw him ride at the Santa Anita, Melbourne, Tokyo, Hong Kong, Dubai and Bahrain, it was back to humdrum. He had just one ride at Lingfield, in the Betway Winter Derby, on a day that might have had him wondering why he was not still in warmer climes.

Naturally, he won. It is what he does.

Though only a Group Three contest, Dettori showed just why he is like a good vintage, uncorking a stupendous piece of tactical riding, arguably as good as any in his career, stealing a lead, slowing things up and kicking clear aboard the oft-complicated Dubai Warrior (13-8) for a two-and-three-quarter-length victory.

Dettori said: “We were going to have two or three horses in the race and unfortunately Rab (Havlin, his usual jockey) was suspended and so I had to come back. I left my family skiing and came back a day early, but I have been keeping myself very fit.

“Of course, it was cat and mouse to beat Bangkok (8-13 favourite) and I thought if I could get him to come back and make it a little more difficult for Silvestre de Sousa, I would win – and it worked.”

He added: “The scariest part today was jumping off him – he is about 18 hands. He has such a big body and it has taken a bit of time for it to come together, but I suspect we will come back here on Good Friday for the Easter Classic.”

There was no question he brought more than a little sunshine to the fans daring to brave the elements, but those little glimpses of joy are what Dubai Warrior’s trainer and Dettori’s great friend, John Gosden, appreciates in the grim winter Newmarket mornings.

“Frankie has been a really top jockey for a lot of years,” said Gosden, who first jocked him up when the Italian was an effervescent 16-year-old.

“He loves it, still enjoys it, knows everyone in the stable and tells us what to do. He is very professional, and it is fulfilling to have him around, but it is also great fun as well. It is not a bad combination.

“He teaches the young riders so much and while he tries to teach me a few things, half the time I say, ‘one of your ideas out of 10 is a good idea, and the rest you can discard’. Yes, he is very good with the youngsters and it is always a pleasure to see him and have him around.”

Gosden is likely to return to Lingfield with Dubai Warrior on April 10, where he could meet Bangkok again.

After watching the Dettori masterclass, Gosden said: “It was a great ride, but that is what you get with Frankie. The horse broke well and he had a perfect rhythm.

“He nicked five lengths when they were all messing about and they had to use a bit of petrol to get to him, and then he kicked again. He’s a clever old boy, Frankie. Leave him alone – he’s good. Don’t complicate him with instructions!”

The first ‘Derby’ of the year in the bag, Dettori will now head east. “I’m in Saudi Arabia on Friday and Saturday – it is all go.

“It is a nice way to start the season here. I’m enjoying it still. It always helps when you are riding good horses and having big winners. I will carry on until my legs can’t do it!”

Dettori may not be ready to finish punching the clock just yet, his apparent bargain against Father Time holding fast – and how the sport should rejoice. Enjoying rides like we saw at Lingfield on Saturday is what racing is all about. 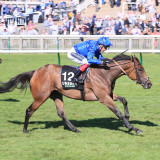