The Cheltenham Festival: Get all the inside track from Paul Nicholls' media morning

From Solo to Cyrname: Paul Nicholls staged his annual pre-Cheltenham media event on Thursday, after an early-morning trip to Wincanton. Here's what our man on the ground, Will Hayler, took out from proceedings.

The day had begun early for Nicholls. Despite heavy overnight rain that put paid to racing down the road at Taunton, the effects of which meant that water was pouring down the hills alongside Manor Farm Stables, a small but select team of his horses had made their way to nearby Wincanton Racecourse for a crucial pre-Festival workout.

Among those in action were Politologue (Sam Twiston-Davies), Frodon (Bryony Frost) and Clan Des Obeaux (Harry Cobden), along with the less-discussed likes of Ecco, a possible runner in the Martin Pipe, and Give Me A Copper, being brought back to the boil in time for the Randox Health Grand National, who had a spin under Bryan Carver.

"It all went well," said the trainer. "It was good to get them out, get them sweating a bit and have a bit of fun, while bringing them forwards."

"In as good a shape as he has ever been."
Asked to name his best chance of a winner at this year's #CheltenhamFestival presented by @MagnersUK, @PFNicholls is unequivocal.#ClanDesObeaux pic.twitter.com/f4u1RhcUfp

No wins from five starts might point to an issue on the track for Clan Des Obeaux, but Nicholls is having little luck with the suggestion - especially given that he finished second on three of those five Cheltenham appearances.

"Until Kauto won, he had the same sort of record and he upset a few things," said the trainer. "Those things are there to be proven and disproven. He doesn't have a bad record at Cheltenham. He should never have run in the Triumph Hurdle. That was just because Ged [Mason] wanted him to run. He ran well in novice chases and he ran well in the Gold Cup. You couldn't say he didn't act on the track then.

"He's just a different horse this year. The King George he'd have won at three miles or three and a quarter miles. He was staying on and Sam [Twiston-Davies] couldn't pull him up.

"He was impressive this morning at Wincanton too. We've learnt different things about him as we have gone along. Until they win at Cheltenham, they will always say 'He doesn't act at Cheltenham, but that's the same with any horse'.

"It's a tough race, but I think he's my best chance. I'm looking forward to running him."

"A beautiful horse, just a lovely model. His temperament is amazing and he has tightened up a treat." @PFNicholls can't hide his 💓 for Solo#CheltenhamFestival pic.twitter.com/iBSNH00Wnw

Circumstance has led to the postponement of a gelding operation for Solo, who - unusually in modern jumps racing - remains an entire horse as he heads for the JCB Triumph Hurdle.

"If we'd gelded him, we'd never got to run him this month. At that point, it would have been too late, so we kept him as he was and we'll have to make the decision what we do in the future," said Nicholls, who didn't rule out the possibility of him goin on to become a stallion once his racing days are over. "He's the most perfect model to look at and he's by Kapgarde, so there's potential on pedigree."

One thing he did rule out was the Unibet Champion Hurdle. Or did he? Yes, he did. Didn't he?

"He has a mark of 157, which is not far off some of the horses in the Champion Hurdle," said Nicholls. "It would be interesting in that with an 8lb four-year-olds' allowance, but he will run in the Triumph Hurdle. That’s his job and he should go very, very well."

He was asked to clarify that supplementing him into the Champion Hurdle was not on his mind.

But you're committed to the Triumph Hurdle now? "Yes," he said, with 99.9% conviction.

Solo did indeed look a picture as he was paraded - "the perfect model", said Nicholls, who was simply unable to hide his affection.

"Just look at him - he is a beautiful horse," he said.

"We have been delighted with him from day one. He is a big tank of a thing who takes loads of work. We love what we saw from him heading to Kempton. He was actually meant to run at Wincanton a few weeks ago but that meeting was off.

"I am glad we went to Kempton because he gave us that wow factor and we realised just what we have on our hands.

“I was worried that, having been around a big galloping track at Auteuil, that Kempton may catch him out a bit not being a Flat horse, but he coped with it well. Harry was very impressed.

"He had to prove something, which he did. They don't all perform first time when they come from France, so it was good to see him do it.

"I said to Harry [Cobden, the jockey] just to keep it simple. If they jump and stay and gallop, you're just as well going from the front, but you know full well in the Triumph that Dan's is going to go hard, so just follow them. He's a real relaxed horse, not a free-going horse."

While the Betway Queen Mother Champion Chase shapes up to be one of the races of the meeting, as Altior clashes with Chacun Pour Soi and Defi Du Seuil, Paul Nicholls hopes he will be supplying at least two live outsiders into the line-up.

"They're big prices, but they'd both have chances. Particularly Politologue, you know. His two runs earlier this season behind Defi {du Seuil] giving him weight and his run in the same race last year when he came alive. And he's in that shape again," he said.

"He's got it all to do to win a Champion Chase, but he's a big, big price. He was not beaten far last year and basically jumped the last upsides Altior. He comes right at this time of the year and I was very happy with him this morning.

"I think I had £50 on Dynamite Dollars to win the Champion Chase at 33-1 - ages ago, before his run at Newbury. But his chance certainly isn't any worse now.

"I thought it was a blinding run at Newbury to be beaten three and a half lengths. He won’t mind if it keeps raining and is a real lively outsider in my book. He does not need to improve too much on his Newbury run to be in the right mix ... and he is bound to improve on that run.”

Despite an unorthordox preparation for the St. James's Place Foxhunter Chase, Nicholls is hoping to get Alcala to the starting tape as he attempts to win the race for the third time in four years.

"I think Alcala will run and Bob and Co will wait for Aintree," he said. "He's got to get over the fact that he had two hard races in a week, which we needed to do in order to get him qualified, and show us that he is over that. But if we can get him back to his best, he's not without a chance. It's a very open race this year.

"David Maxwell has got Shantou Flyer in the race too and I don't think Bob and Co really gets three and a quarter in any case. I know he got it at Fontwell, but that was at a trot. I think he'd suit Aintree, he could bowl along and he jumps great."

"The fact is that a lot of them won't get in," said Nicholls, when asked to unpick some of his handicap contenders.

"Cliffs Of Dover might run this weekend and if he goes okay, he might get into the boys' race. I suspect Brelan D'As will run in the Brown Advisory Plate - that race would be my choice anyway.

"McFabulous has got a tidy mark of 132. He's in the same position as quite a few of mine in that I have put them in, knowing they will get balloted out, but giving them the option of running at Kempton in the consolation races.

"He's a great example in that he was a very good bumper horse who was a bit slow coming to hand this year. Hopefully he'll run in the EBF Final at Sandown on Saturday week.

Cyrname '100 per cent fine' but precautionary scan will make sure

Some 200 miles east of Somerset, Cyrname was not among those on parade to the media.

But the news was pleasingly good about Britain's highest-rated jumps horse (is time to stop saying this yet?), who Nicholls hopes could yet be action before the end of the season, provided that a full MRI scan in Newmarket yields no surprise results.

"He's been 100 per cent fine since Ascot. He never had an issue. His blood was good. But Johnny and I thought that before we got on and trained him, we wanted to make sure we weren't missing anything," he said.

"If that's OK, we'll quietly creep on and try and make a plan to run him somewhere.

"If there is something wrong, it's very minor. But I'd say it was nothing. He just had a hard race at Ascot when he was ready to win, another one at Kempton when it didn't work out and then it was hard to get him at his best for Ascot, whereas last year he'd had a good preparation. But we'll get him back.

"We haven't made a plan, but we might just miss Aintree and wait for the Oaksey Chase at Sandown. That might be the race. But let's just wait and see what the vets say before we crack on. We'll give him a bit of time."

Over on Betfair, it's now only something like a 1-2 chance (at the time of writing) that the Cheltenham Festival even begins as scheduled on March 10, despite official assurances that there are still no fears over the possibility of a public health-related postponement.

Nothing to see here? Let's continue to hope that doesn't prove, literally, to be the case in a fortnight's time. 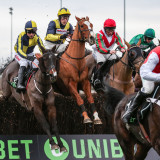