The 2021 Cheltenham Festival: Three ante-post bets for the novice hurdles

The top novice hurdle entries for the Cheltenham Festival were announced on Wednesday and we have picked out three dark horses to keep a close eye on over the weeks ahead.

A 50-1 second on his debut in a bumper at Cheltenham in October, he has since looked the real deal in two starts over hurdles.

A smart winner at Newbury on his hurdling bow, a race in which Flinteur Sacre was fourth, he impressed with the manner in which he put his stamp on proceedings in the closing stages despite lacking experience.

He was then awesome when following up in the Kennel Gate at Ascot. Always prominent, he ran on strongly despite hitting the last to score by two and three-quarter lengths, while giving the impression there was more left in the tank.

The Sky Bet Supreme Novices’ Hurdle is one of the iconic races at the Festival, won by greats such as Vautour, Douvan and Altior in recent years.

Given his mix of speed and raw ability, My Drogo strikes as the type who would be up for the fight in a Supreme. He will clearly need to progress again, but there has been improvement forthcoming from every start in his career so far and at 12-1 he looks worth backing to give the Skelton team a perfect start.

Owners Joe and Marie Donnelly have a stack of talent at their disposal for Cheltenham in March, and this five-year-old of theirs warrants close attention.

Placed in Graded company in his native France, he looked in need of the experience when beaten by Holmacapony on his first start for Willie Mullins at Punchestown in November.

He subsequently won easily at Leopardstown over Christmas (watch above) and he could next be in action at the Dublin Racing Festival.

The manner in which he quickened last time was very impressive and he looks a player in the Ballymore if connections decided to take that route.

Clearly, his credentials will be tested if connections decide to run at Leopardstown next weekend, but it would be no surprise if he advertises his claims there. If he does, the 10-1 for the Ballymore will swiftly vanish.

He’s a no-nonsense stayer whose first preference is probably the Albert Bartlett over three miles. He’s a general 16-1 for that contest.

A stiff test of stamina will be right up his street as highlighted by his Grade Two success in testing ground at Limerick over the festive period. You can watch the closing stages of that win above.

A €260,000 purchase, his future undoubtedly lies over fences. However, he looks a solid each-way play for the Festival.

A sound jumper, his main weapon is clearly his stamina and it’s not hard to imagine a scenario where he will be galloping on strongly while others are weakening.

There may be flashier types such as Stattler or Bravemansgame towards the head of the betting, but in the Albert Bartlett you invariably need a horse who thrives in a battle and stays every yard. He fits the bill. 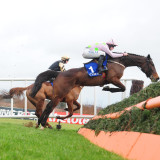 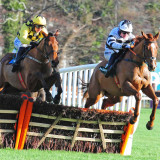