The Charlie Hills-trained Battaash had made the Group Two contest his own in the recent seasons and was the 2-1 favourite to add to his tally off the back of finishing fourth on his belated reappearance when defending his crown in the King’s Stand at Royal Ascot.

The seven-year-old travelled strongly for much of the five-furlong journey under regular partner Jim Crowley, but his finishing effort was ultimately short lived and he weakened late on to finish a well-beaten seventh.

Retirement now seems a possibility for him.

Having won her first four races in her homeland, Francois Rohaut’s Suesa was the market leader for the Commonwealth Cup at the Royal meeting last month, but could finish only eighth.

But the 7-1 shot bounced right back to form on the Sussex Downs, rocketing home from the rear in the hands of William Buick to score by three lengths.

Dragon Symbol was best of the rest, again having to make do with minor honours after being demoted to the runner-up spot in the Commonwealth Cup and finishing second in the July Cup at Newmarket.

Buick was registering a sixth win at this year’s Qatar Goodwood Festival to move clear in the Leading Jockey standings.

James Wigan, racing manager to owner George Strawbridge, said: “We thought Suesa was very good before Ascot. Then the rains came and the ground was bottomless and she just could not act on it. William looked after her then.

“What she did in France was very impressive before. We didn’t know what she'd be like against these, but we knew she was pretty good.

“There are not really any sprint races in France in the summer, so this was really the only place to come, but I was concerned about this rain!

“As for a run at York [in the G1 Nunthorpe Stakes], it depends what she is like when she gets back. She’ll have had quite a lot of travelling, coming here and then going back, then coming again having already done Ascot. The Abbaye will be the obvious target.

“There is a very good chance she will stay in training next year as the owner is very much a sportsman.”

“It was an amazing performance. She travelled through the race strongly and once she got into it, she had that strong kick at the finish. She was very impressive, and she has a great attitude to go with it.

“She looked good in France before the Commonwealth Cup at Royal Ascot. The ground was bad that day and it was over six furlongs, and she had no cover. I learnt a lot about her that day. She's full of speed.

"She came back to five furlongs today and travelled so smoothly. She was hard on the bridle the whole way and she has that good kick at the finish.

"Mr Rohaut was adamant that she was in good shape, and he was right. She's quite strong to sit on, she's all there and she moves like a real sprinter. She's a lovely filly."

Oisin Murphy said of the runner-up: “Dragon Symbol is better than that. It’s a shame the good ones weren’t drawn beside him, we followed the wrong ones.”

Kevin Ryan, trainer of Glass Slippers, said: “I am absolutely delighted. She came there travelling very strongly. We would like to have got a racecourse gallop into her, but the ground has been so firm everywhere. We didn’t want to risk doing that. We knew coming here she was going to need the run. We can look forward to the rest of the year now.

“We will have a chat over the weekend, but we will generally take the same sort of route, the race in Ireland [Flying Five Stakes, Group 1] I would imagine will be on the agenda. It will be a nice chat to have on Sunday morning.” 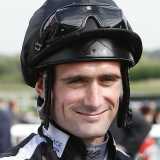