The British champion jockey teamed up with local trainer Frankie Lor in the Group One heat, with Glorious Forever promptly away and soon taking on his full brother, Time Warp, for the early lead.

Time Warp’s rider Zac Purton was happy to let De Sousa kick on in front and he was still well in control turning for home, with Glorious Forever finding plenty as the race began in earnest with a couple of furlongs to run.

The siblings were still battling it out inside the distance, but while Glorious Forever sealed victory, Time Warp was pipped for the runner-up spot by the fast-finishing Japanese raider Deirdre.

Ed Walker, who previously trained the winner in Britain, fielded Stormy Antarctic but he failed to feature in the shake-up.

"Everything was in my favour, the draw was perfect for riding a horse who could be one or two in the run. Everything went to the plan," De Sousa said.

"I didn't want to overdo it in front but to make sure Time Warp didn't come around, I had to make sure we were going a true gallop.

"I won the battle for the first 300 metres and I was going so well at the 800 (metres), I thought to myself they would have to be very good to pick him up; it would have to be one of the Europeans because I didn't think Time Warp would come again."

Eziyra fared best of the European contingent as she finished third behind Exultant in the Longines Hong Kong Vase at Sha Tin.

No less than eight runners from Britain, Ireland and France went to post in the 12-furlong contest with Andre Fabre’s Waldgeist and the Sir Michael Stoute-trained Mirage Dancer among the leading contenders.

The early gallop was set by Crocosmia and turning for home, Eziyra appeared to be perfectly positioned under Christophe Lemaire as Rostropovich briefly tried to challenge down the outside of the track.

However, it turned into a head-to-head between the Tony Cruz-trained Exultant and Lys Gracieux, with the first named prevailing in a tight finish in the hands of Zac Purton.

William Buick found himself in hot water with the stewards, receiving a six-week ban for what they deemed a “reckless” ride on Pakistan Star, who finished sixth. Waldgeist and Red Verdon were hampered in the incident.

British raiders out of luck behind Beauty:

Beauty Generation won his second Longines Hong Kong Mile as he easily accounted for his rivals in the Group One at Sha Tin.

The John Moore-trained gelding is one of the top-ranked milers in the world and was a hot favourite for this event after winning his last four starts.

Zac Purton had to put in some early work to get his mount to the front in the early stages, but once he assumed the lead, Beauty Generation always looked comfortable and he stretched away when his rider gave the signal in the straight.

Beauty Generation soon put daylight between himself and the field, with Purton easing down some way before the line as the William Buick-ridden Vivlos took second with Southern Legend third.

William Haggas’ One Master could not get a pitch early on in the race but finished well enough while Andrew Balding’s Beat The Bank was back in the pack.

Mr Stunning secured back-to-back victories in the the Longines Hong Kong Sprint as he once again held off DB Pin at Sha Tin.

The duo filled the first two places in the Group One event last year, but John Size’s Hot King Prawn was widely expected to prevail after winning each of his last four starts.

He usually sets the pace but was taken on for the lead by Ivictory in the middle of the six-furlong race and dropped away in the final furlong.

Karis Teetan was getting an excellent tune out of Mr Stunning though, and he flew home with DB Pin, who was also second last year, taking minor honours.

Teetan said: “This is incredible, I had a lovely run through. You cannot describe this feeling.”

David Elsworth fielded Sir Dancealot in the race, but he never featured in the finish. 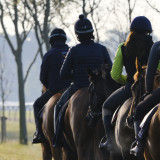 We're counting down the hours and the long break is nearly over, say the BHA
Oisin Murphy thrilled to land ride on Millisle in 1000 Guineas 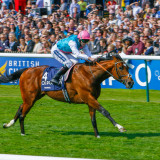 We're counting down the hours and the long break is nearly over, say the BHA
Oisin Murphy thrilled to land ride on Millisle in 1000 Guineas
Betslip
JoinLogin
DepositLogout