Donnacha O’Brien is convinced Shale will improve a great deal for her first start of the season when she runs in the Tattersalls Irish 1,000 Guineas.

The filly is bred for great things, being by Derby winner Galileo out of a Guineas heroine in Homecoming Queen, and last year showed she had inherited plenty of ability.

She enjoyed a great rivalry with Pretty Gorgeous last season. The pair met four times, winning two each, and Shale gained a top-level victory herself in the Moyglare Stud Stakes – before disappointing in the Fillies’ Mile.

On her reappearance in the 1,000 Guineas Trial at Leopardstown last month, she was only fifth of 15 – but her trainer expects her to take a big leap forward next weekend.

“She’s in good form and is going straight to the Curragh now,” said O’Brien.

“We’re very happy with her. She would have really needed her first run a lot – my older ones were really taking a run, and I was actually delighted with her.

“I’m expecting a big run from her at the Curragh.” 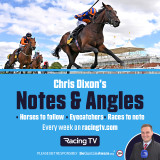