Watch how odds-on favourite Khuzaam was caught in the final strides in the feature at Kempton on Wednesday evening.

Set Piece returned to winning ways in a thrilling finish to the British Stallion Studs EBF Hyde Stakes at Kempton.

The Listed event looked sure to go the way of 5-6 favourite Khuzaam, who was quickly into his stride and at the head of affairs under Jim Crowley, holding a clear advantage with a furlong to travel.

But James Doyle had been getting to work on Hugo Palmer’s Set Piece from two and a half furlongs out and he fairly rattled home to grab the Roger Varian-trained market leader on the line, scoring by a short head at 16-1.

Accidental Agent – winner of the Queen Anne at Royal Ascot last year – was another to finish strongly in third.

It was a second success from two outings over the course and distance for the son of Dansili, who triumphed first time out as a two-year-old and was in action for the first time since undergoing wind and gelding operations.

Palmer said: "Set Piece is a horse I have always adored, but it has not been plain sailing with him.

"We had to top and tail him during the summer to help him out and it seems to have made a real difference.

"James was very pleased with him, particularly with the turn of foot he showed. I think he is a progressive, exciting horse and it is great to get him back on track.

"He has won three races from six starts, and is now a Listed winner having been Group Three-placed earlier in the year.

"There are a whole number of options open to him now and which route he takes will be down to Prince Khalid and his family."

Doyle added: "That was a good performance from Set Piece.

"It worked out tonight and he did it really well. He has been gelded and had a wind op since his last run, and we are delighted with tonight's performance.

"I wanted to sit a bit closer, because I thought on paper there was a lack of pace, but Set Piece is usually slowly away and I wasn't able to. We just took our medicine and when I pulled him out in the straight, I thought he did really well to win.

"I didn't think I was going to get there. I didn't even know I had won when I crossed the line, so it was a nice surprise.

"He has always shown us good form at home. Emma Clutterbuck, who is one of Hugo's assistants, rides him at home every day and does a great job with him. She has always kept faith with the horse and said he was back flying today, so fair play to the horse and the team." 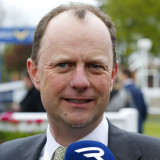