Evan Williams is hoping Secret Reprieve can overcome his inexperience and justify favouritism in the Coral Welsh Grand National at Chepstow on Saturday.

The seven-year-old has headed the ante-post market for the long-distance handicap chase since a resounding success in the Rehearsal Chase at the Monmouthshire venue last month.

That was only his fifth run over fences and eighth career start in all, but Secret Reprieve does tick a lot of boxes ahead of the contest, which is subject to an 8am precautionary inspection.

“The positives are he’s well handicapped, he has a good racing weight and he loves the track,” said the Llancarfan trainer.

“The negatives are he’s very inexperienced and he’s got no experience in big fields, so there are positives and negatives but fingers crossed it’s on.”

Williams also saddles Prime Venture, who was fourth behind Potter’s Corner in this race last season and made a winning reappearance at Sedgefield in November.

“Prime Venture is a horse who has to improve because he’s up 4lb, but I think he has improved,” he said.

“He’s far from straightforward, but on his day he does thrive in races like the Welsh National.

“He’s been placed in a Welsh National, placed in a Midlands National and he’s more than capable on his day.”

Ramses De Teillee, runner-up to Elegant Escape in December 2018, is one of two runners from the David Pipe stable.

The grey has to bounce back from a disappointing run in the Becher Chase at Aintree, over the Grand National fences, won by his stablemate Vieux Lion Rouge.

“Ramses De Teillee didn’t handle the fences at Aintree last time. He’ll be more at home over the park fences. He’s finished second in the race before,” said the Nicholashayne handler.

Vieux Lion Rouge has a 4lb penalty for his Becher success.

“Vieux Lion Rouge is 8lb well in, but going up 12lb for his last win was harsh enough,” Pipe added. “Both are in good form and will like the ground and hopefully have each-way chances.”

Tom George feels Springfield Fox will relish the heavy ground and is expecting a big run.

The eight-year-old has not run over fences since unseating his rider in the National Hunt Chase at the Cheltenham Festival, but had a prep run over hurdles on this course five weeks ago.

“He loves really heavy, testing ground – that’s perfect for him. He gives the impression he just keeps galloping. He’s not a speed horse, he’s an out-and-out stayer,” said the Slad handler.

“I think everything is in his favour, I just hope it goes ahead.”

Truckers Lodge and Yala Enki were second and third 12 months ago and their trainer Paul Nicholls is convinced they will not be far away again.

“Conditions will be ideal for both of ours,” the Ditcheat handler told Betfair. “Yala Enki stays all day, has gone close in the race for the last two years and is again a big player despite carrying top weight.

“He did brilliantly at Cheltenham in November when he was only just chinned by Ramses De Teillee. That was a career best in my book, but he then over jumped at the first in the Becher Chase at Aintree which was just one of those things. He looks rock solid in a race tailor-made for him.”

Truckers Lodge won the Midlands National last season, but is a lot higher in the handicap and unseated his rider at Kelso on his return.

“He is nice and fresh and was fine after he unluckily unseated Lorcan Williams at Kelso the day I expected him to go close,” said Nicholls.

“He is a relentless galloper and ran clean away with the Midlands Grand National just before lockdown, although the handicapper had his say afterwards by raising him 14lb.

“Truckers Lodge ran a blinder in this race a year ago to be beaten less than two lengths by Potters Corner and will give a good account again, though it will be harder for him from his new handicap mark.”

Nicky Martin reports The Two Amigos to be in better shape than 12 months ago when he was fifth and he made an encouraging reappearance when second to Secret Reprieve last month.

“He doesn’t do a lot when he comes off the bridle and he is a front-runner. That’s where enjoys being, but he does stay all day. Hopefully, he’ll stay a bit better this time,” Martin told Sky Sports Racing.

“Obviously the favourite (Secret Reprieve) is well handicapped, but we’re slightly better in at the weights this time round.

“He’s just very consistent. He’s rated 142. He’s off the same mark as he was last year. He’s never won off that mark, but he’s always there or thereabouts.”

Nassalam gets another bite of cherry

Gary Moore is delighted to have a second chance with Nassalam in the Coral Finale Juvenile Hurdle at Chepstow on Saturday.

The four-year-old gelding would have missed the Grade One contest had it been run when originally planned over Christmas as he was under a cloud.

The meeting was abandoned but was rescheduled, subject to an 8am inspection, giving Nassalam the opportunity to show just how good he is.

The French import has won his two starts for Moore, both at Fontwell, by 59 and 49 lengths. The opposition may have been moderate, but Nassalam could not have been more impressive.

Moore is as keen as anyone to see how the horse fares against much better rivals.

“He wasn’t right when it was meant to be run,” the West Sussex trainer told Sky Sports Racing.

“With the Irish not being able to come over, he might have a decent chance, hopefully.

“He’s quite a big horse and strong as well with a fantastic mind. He’s very straightforward to train.

“He is just a very nice horse. Hopefully they will be able to run on Saturday so we can see how good he is.”

Adagio has made a good start to his hurdling career with two victories and a second from three starts.

His trainer David Pipe is just hoping he can cope with the likely heavy ground.

“He’s done well this season. He might not want the ground as easy as it what it will probably will be, but he goes there with a good chance, hopefully,” said the Nicholashayne handler.

Fergal O’Brien is happy to give Elham Valley his chance in a Grade One after making a successful hurdling debut at Sandown last month.

The Cheltenham trainer has been happy with the horse in the meantime and has no concerns about the ground.

“He had his Sandown form franked as the horse of Gary Moore’s (Hudson De Grugy) has come out and won since,” said O’Brien.

“It wasn’t until speaking to you boys (press) that we thought about this race but, having spoken to both Paddy (Brennan) and the owners, we know he will love the ground and track, so we decided to give it a go.

“He is a lovely little horse and is a joy to do anything with. He loves his jumping and we schooled him on Thursday and he was electric from one side to the other.

“Where he will finish I don’t know, but we will let him take his chance and he will give it his best.”

Paul Nicholls has a fascinating runner in Houx Gris, who is being pitched at a high level on his first start in the UK.

The four-year-old won at the second attempt over hurdles in France for Sylvain Dehez begore joining the Ditcheat handler.

“He is an interesting recruit from France who has been pleasing us since he arrived early last month. We bought him at the sales early in November shortly after winning at Auteuil,” Nicholls told Betfair.

“I don’t normally run newcomers so quickly, but he settled in straight away and has adapted beautifully to our routine.

“He is working great, seems to be improving and looks to be a smart juvenile. I really like what I see and just hope he has acclimatised enough to give a good account of himself.”

Bannister’s last two starts have been in France, but he is back running close to home. He has also been declared for the opening juvenile hurdle at Kempton, but trainer Tom George would prefer to run him at the Welsh track.

“The plan is to go Chepstow if it’s on,” said the Slad handler.

“He’s picked up some nice prize money in France. He’s very much a novice chaser for next season, but he has been running well in France on his last couple of runs.” 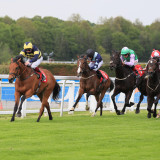 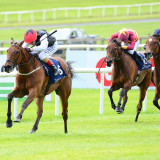 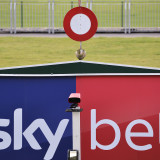