I have been in pretty good form this week, but recent Saturday shifts in the studio have felt a bit long as my tips have been falling out of the back of the TV.

Obviously, Saturdays are more competitive and good prices mean we can soon recover. Hopefully, it is my turn this weekend.

Has gone up 8lb for winning by two and a half lengths at Wetherby last time out, but he’s only 3lb worse off with the runner-up, War Glory, who reopposes.

I believe he has come off the best in terms of handicapping and am very hopeful he will still prove to be well-in. Arrivederci has not been rushed and his Wetherby win came after he landed a competitive novice at Wincanton on his final start of last year. He has shown he can handle big fields on a sharp track, so hopefully can cope with this test.

Bring home the Jumps with a free one month trial of Racing TV. Watch over 65 live meetings from Britain and Ireland on unlimited devices. Hurry, there are only a few left! Click here to get yours now!

Seems to be gaining in confidence rapidly over hurdles and after winning in clumsy fashion at odds-on two starts ago, he really came good over this course and distance last time.

Being a juvenile, he gets a useful weight-for-age allowance in this handicap and Dr Newland has added to the weight advantage by booking the useful Lily Pinchen to take a further 5lb off.

I expect him to be prominent throughout and if jumping as well as last time expect he will hold off all challengers.

There are so many horses on the improve in this most competitive handicap hurdle I decided I couldn’t split them but with some bookmakers going six places I am happy to go for seasoned campaigner Clyne to get into the frame at massive odds.

He certainly knows his way around Haydock, with a couple of course wins, plus he ran his best race last season over this trip off a 3lb higher mark.

He ran a promising enough race on his reappearance and with Jordan Nailor taking off a useful 5lb he might surprise. Betfair and Paddy Power offer a whopping 66-1.

She’s a most consistent and progressive mare who has invariably run well after a break, so I am not at all concerned about her lack of a recent runs, especially given the form of her yard.

She pulled up on her final start last season but that is easy dismiss as she got into a sustained battle for the lead and was a spent force a mile from home.

A look down this field suggests she is very likely to get a much less contested lead here and, even under top weight, I am hopeful nothing will get past her.

She disappointed in the Peter Marsh here last winter but that was probably too big an ask at that stage of her career and I am very hopeful she can progress again this term. 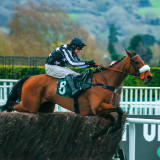 The Ladbrokes Long Distance Hurdle: Each runner under the spotlight and a 20-1 tip
News Articles