Lucinda Russell and Peter Scudamore will target the Coral Gold Cup at Newbury with one or both of last season’s exciting novice chasers, Corach Rambler and Ahoy Senor.

The former won twice at Cheltenham last season, signing off with victory in the Ultima Handicap Chase at the Festival meeting.

Ahoy Senor was imperious in romping to a five-length success in the Grade One Mildmay Novices’ Chase at Aintree, having previously chased home L’Homme Presse in the Brown Advisory at Cheltenham.

Scudamore, Russell’s partner and assistant at their yard just south of Perth in Kinross, feels the three and a quarter miles of the £250,000 Grade Three feature at Newbury on November 26 will suit either or both horses.

“We are in a very lucky position to have two lovely novices from last season,” said Scudamore.

“Ahoy is very well and back in training, and he is just doing steady work.

“We have him and Corach Rambler pencilled in for the Coral Gold Cup,” he added of the race sponsored previously by the likes of Hennessy.

“I read that Paul Nicholls’ horse, Clan Des Obeaux, will go for the Coral and I haven’t looked really – it is a long way off.

“Both of them were novices last year and history tells us that novices have a good record in that race.

“There is a possibility Ahoy will go there, but if he doesn’t there is a Listed race at Aintree and a Wetherby race he could go for. He has won at both those tracks.”

Seven-year-old Ahoy Senor looked a different proposition at Aintree, where he emphatically turned around form with Bravemansgame and L’Homme Presse, having played second fiddle to those two in the Kauto Star and Brown Advisory respectively.

“It makes some sense to keep him at these flatter tracks, but he has also had a practice round at Cheltenham,” added Scudamore.

“So there is lots to consider, including Sandown. Likewise, where will Venetia go with hers (L’Homme Presse)?

“One of them I would love to get to the Coral – that is our first big-season target. With all due respect to the other horses, if Paul sends his good horses there, it should be a hot race.” 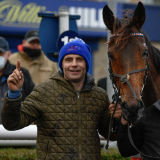