The 1,000 tickets available for the Dubai Duty Free Irish Derby were snapped up in just ten minutes. It is likely to take form students a lot longer to unravel who might win.

High Definition is favourite to provide Aidan O’Brien with a 15th win in the great race but he also has four other challengers and history tells us that the master of Ballydoyle does not always win with his perceived “first string”. For instance, it was only two years ago that Sovereign, dismissed as a pacemaker, won by six lengths for him at 33-1.

There has been only one British-trained winner this century – Jack Hobbs delivered in 2015 – but there are three potent challengers from these shores this time in Mojo Star, Hurricane Lane and Lone Eagle. The last-named will be ridden. by Frankie Dettori, seeking a belated second success in the race after guiding Balanchine to victory in 1994.

Here’s a guide to all 11 runners with galloping clues and interviews. Watch what happens live on Racing TV at 3.45pm.

Aidan O’Brien relied on Bolshoi Ballet in the Derby at Epsom but reverts to type here, with Arturo Toscanini (named after an Italian composer in case you are wondering) among five challengers. His backend maiden win at the end of last year was at the Curragh but his efforts this year suggest he is some way down the pecking order at Ballydoyle, for all that he was not seen to best advantage when seventh in the Queen’s Vase last time. He looks a thorough stayer.

Won the in-and-you-are-in Group Three Gallinule Stakes at The Curragh in late May, so you cannot blame his connections for rolling the dice. His pedigree and running style suggest the step up to a mile and a half will suit him well but his defeat in the Dee Stakes at Chester on his penultimate start suggests plenty more is required.

Watch the Irish Derby on Racing TV at 3.45pm on Saturday

The step up to a mile and a half suited the chestnut colt at Leopardstown last time when he made all in the Listed Nijinsky Stakes. However, the form of that race hardly screams “Irish Derby winner in waiting” and the blinkers he wears are not for decoration, his high head carriage hinting he may not be completely straightforward.

Won both his starts at the Curragh as a two-year-old, looking a potential top-notcher when coming from last to first in the Group Two Beresford Stakes over a mile in late September, albeit the form has some holes in it. There were pluses and minuses to be gleaned from his return in the Dante, when a staying-on third to High Definition. He lacked the speed to hold his place but did stick at it, and there is little doubt the step up to a mile and a half on this galloping track will suit. Drawn wide, he’s likely to have to drop in as it seems he can take a little organising.

The Frankel colt was preserving his unbeaten record when a dour winner of the Dante last month (High Definition back in third) and, with stamina looking his main weapon, seemed sure to enjoy stepping up to a mile and a half on softish ground in the Derby. However, he looked short of gears and was beaten an an aggregate of eight lengths into third. This more orthodox track might suit him better but the quicker ground is a niggle as he’s quite a heavy-topped colt who hits the deck hard.

Progressed well as a two-year-old when his all-the-way Zetland Stakes win in the autumn indicated he would be a force in middle-distance races this term. I was initially disappointed (and poorer) after his fourth on his return in the Classic Trial at Sandown but his stable was quiet at the time and perhaps he needed the run. Alenquer and Adayard fought out the finish, too, so the form now has a much stronger look. He has since got back to winning ways in emphatic fashion at Goodwood, again making all, and, proven on any going, it would be folly to underestimate him with Dettori on board for the first time.

The Verdict: how good was the Irish 2000 Guineas?

Signed off last season with victory in the Group One Vertem Futurity at Doncaster and touched off star stablemate Poetic Flare in the Irish 2000 Guineas here last month. However, he never looked like supplementing those big wins over a mile in the Derby when a one-paced fourth, beaten 11 lengths. He’s another who will possibly be more at home at this venue but all his best form has been achieved on testing ground and a sound surface looks on the cards.

Flashback: Last year's Derby day, which was run before Epsom because of the pandemic

Hard to make any case for him on form and it looked like he was deployed as a pacemaker in the Hampton Court Stakes last time, when he ended up beating one home. Expect him to set sensible fraction for his stablemates, in particular High Definition. Drawn next to the rail in stall 1, he should soon be at the head of affairs.

Touched off at Newbury on his first two starts – Richard Hannon saying on Zoom on Thursday that “you could have knocked me over with a feather” when he came up short on the second occasion. He was then thrown in the deep end in the Derby but belied odds of 50-1 by chasing home Adayar, with High Definition and Mac Swiney well adrift. That looked no fluke and, while he’s untested on it, his pedigree suggests quicker ground will not be a problem.

Ran seven times in the second half of last summer, signing off with a Group One win over a mile in the mud in France. Failed to make an impact in the 2000 Guineas on his return but fared better when third in the Irish equivalent next time before never figuring from a wide draw in the French Derby last time. He probably has a bigger performance in him but a leap of faith is required.

Makes a swift return after finishing runner-up in the Queen’s Vase last week, having been touched off in Listed company before that. He had been runner-up to High Definition when that horse made his debut at The Curragh in late August before going one better in a big field at the same track in April. Like his brother, Kew Gardens, he looks a stayer and one of the versions of the St Leger may offer him a better chance of Classic glory later in the year.

A lot hinges on how much benefit High Definition has derived from his reappearance run in the Dante. The formbook suggests he’s short enough at about 2-1 as he finished behind Hurricane Lane in the Dante and that horse, in turn, was well adrift of Mojo Star at Epsom.

There’s no obvious reason why Mojo Star should not confirm the superiority he showed over High Definition and Mac Swiney in the Derby and, having had only three runs he may be capable of better yet. 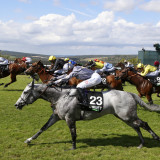