Dave Nevison has three selections that all handle soft ground and is hoping for a Royal winner on the final day of Royal Ascot.

The ground conditions are now soft, heavy in places at Ascot, a dramatic change to the first three days, and there is likely to be plenty of give underfoot on Saturday with further rain forecast before racing.

The three selections below will all handle give in the ground, and hopefully the favourite can land the Wokingham and provide The Queen with a Royal Ascot winner.

His odds will be shortening with every drop of rain that falls on Ascot, but Sir Michael Stoute’s star sprinter was vying for favouritism even before the going changed, and may prove vastly superior to some rivals who prefer a much quicker surface.

He has disappointed at Ascot in the past, but his bad runs have come at the end of a busy season, or when not getting cover in his races, and he produced an excellent effort in this Grade One contest two seasons ago when second to Blue Point.

The seven-year-old might not be as consistent as previous star sprinters, but the signs were good when he won a Listed race on soft on his reappearance where he beat 108-rated Garrus comfortably at Windsor.

He has invariably run his best races on his first couple of starts after a break, and has a lot going for him here.

The selection will take a lead and I am relying on Ryan Moore to get him on the best ground from his draw in a race that seems unlikely to split into two groups.

Has been a handicap blot in the past and did not deliver in last season’s Ayr Silver Cup, but this looks like his coming-of-age season and he now looks the real deal.

He won a Listed event at Haydock on his penultimate start and got a penalty for this, but that still left him 7lb well-in, and he would have finished closer in the King’s Stand on Tuesday had he not met trouble in running.

He will also have no problem with the extra furlong here. In fact, he will be suited to it.

This race is as competitive as ever with some high-class horses among his opposition, but none of the field could be considered up to winning a Group One contest this season, and it is arguable King’s Lynn might be winning at that level before the year is out.

It is usually worth the wait for this contest on the final day and this year the extnded 2m5f contest is more competitive than ever.

Frankie Dettori will be tough to crack on Chester Cup winner Falcon Eight, but Andrew Balding has a very good record in this and Morando looks an ideal candidate.

He certainly excels on testing ground and needs plenty of give underfoot to produce his best form.

He ran well at Group Two level last season and now that he has lost some speed with age, he looks ready for this extreme test.

Morando has shown strong form at the track in the past and can complete a very good week for his trainer. 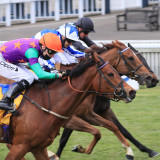