Unibet ambassador Richard Hannon gives an update on some of his stable stars, including 2000 Guineas hope Chindit, for the upcoming Flat season.

Watch: Richard Hannon talks through his leading lights for the season ahead

At Newbury she looked like she is an extremely talented filly, who could be anything. She barely ran straight for a yard.

It took us three months to break her in, she was a real handful. We have had to take our time. Luckily her owner (Mrs E Roberts) has been very patient and it has paid off. She could be a little bit special, very green, all we have to do is channel that in the right way.

A lot of people will say it was workmanlike at Newbury - and I take that on board - but he has never been a flashy horse and for me he did it very well. They went extremely quick, the time was very good and he knuckled down and got the job done and I thought that was thoroughly commendable. I’m looking forward to the Guineas.

Mentally he is in a very good place, he is very sensible and relaxed and generally good horses behave like that. He will improve for the run, like ours always do. Even the horses that we won a Guineas with; Sky Lantern, Night of Thunder and Billesdon Brook - they all got beaten in their trials and came back and won the Guineas. This fella has gone and won it and come home like he wants the mile and that’s the most important thing. Halfway through the year I thought he might be going back to six furlongs, but I am much happier now he looks like he wants a mile.

It was heavy ground that day (in the Dewhurst Stakes), it wasn’t soft. I wouldn’t say the undulations helped, but he will have to deal with them. If he doesn’t deal with them, then we will have to go to a flat track like Ascot for the St James’s Palace Stakes or Deauville for the Prix Jean Prat, but I think he has got the tools to deal with it. He is a very bright horse and he is not very hard to manoeuvre.

He ran a very good race at Newbury [in the Dubai Duty Free Full Of Surprises Handicap]. Traditionally it is a very strong handicap. He came there looking like he was going to win. Sean (Levey) got off and I said are you a bit disappointed and he said no, this is a very good horse. He obviously needed it. He hit the front and then just got tired, but he ran a very good race. I was very pleased with him.

He goes to the Derby trial at Sandown on Friday. I think he will get a mile and a half, but a mile and a quarter will suit. He is in great nick, he has been working super and hopefully he will run very well. He seems to love Sandown and he is going back there, hopefully on the way to the Derby.

He has got a very long stride and that is his biggest asset. When the other horses are stopping, he is lengthening all the time. He retains that action all the way through the race and is very economical. He is definitely going to need that trip now, I think.

I was amazed, having said she would stay, she did not in the Fred Darling Stakes. I do not mind admitting when I am wrong. She lost about six positions in the last 100 yards and she was on her knees so we will go back to six furlongs. There is a nice race at Nottingham and then, if she is good enough, she will go to Royal Ascot.

He won’t be racing now until after Royal Ascot. We gave him a nice break, he is coming back steady. He is a lovely colt who has a heart of a lion, tries very hard, and that’s all you can ask. He will probably be going a mile and six furlongs this year.

He is a Sea The Stars colt who was second at Newbury on debut last season, I thought that he had won but he was beaten in a photo. He has grown and has done extremely well.

We are going to start him off in a novice race and he could be a very good horse, I hope. He is definitely one of the dark horses for the year. He looks like a champ, is by the right stallion and has got no end of ability.

I thought he ran a good race at Thirsk but we may have set it up for the horse that sat last, Toro Strike, who won very well. I am not sure it was the right track for him. We need to find him a level track, we might even go back to the race he won last year at Royal Ascot (Buckingham Palace Handicap) - that is probably going to be our target.

The horse has never had a chance since that unbelievable win at York, people have expected to see that every time. He went off so quick at York and he kept going further and further clear. It was actually done a in a quicker time, carrying 5lb more, than the Gimcrack was the following day.

He ran in some very good races after that. He ran in the Middle Park, a Guineas, all those extremely good races. He came back this year and has already won a Listed race, then was beaten by a very good horse in the All Weather Finals. He is a very good horse on his day. He seems to have his mojo back, he is much brighter and happier. I hope he is going to win a lot of nice races - here and abroad - he is the sort of horse we could travel with.

He won the Spring Cup at the weekend and won it very well. I have a feeling his days in handicaps will come to an end quite soon, he is going to go up for that win. Obviously the Royal Hunt Cup is a possibility, he’d need to be rated about 100 to get into that race nowadays.

I thought he ran well in the Unibet Lincoln. Sean (Levey) got off and said it rode like a very good race. I was pleased with him there, he would have needed that. There is only one way to get these horses match fit and that is playing matches. I would say he is going to go to the Royal Hunt Cup and he would have a very good chance.

I haven’t enjoyed watching a race like Snow Lantern’s at Newbury for a long, long time. She was an absolute pleasure to watch and she is an extremely talented filly. I felt relief more than anything because I probably had bored a lot of people with how good I thought she was and she proved it.

I’ve never known a horse be so like the mare (1000 Guineas winner Sky Lantern), you see her galloping, you see her ears the whole way, that is exactly like the mare. If anything she is a little more elegant than Sky Lantern was - she was very thick set, strong and robust, a very strong mare. This filly is a lot more elegant, but so similar in every other way.

I think she has the speed for a mile, especially for those first few runs, because she is quite exuberant the way she travels. I do think she could go a mile and a half and she would certainly get a mile and a quarter.

He is in great form, he is moving very well. I didn’t want to run him at Newmarket in what turned out to be an extremely hot race, so I am glad I didn’t. The ground would have been a bit quick and with the undulations, I thought we would just leave him for another nice spot. He has improved massively from last year.

Watch the video that accompanies this tour by heading to the Unibet YouTube channel - just click here! 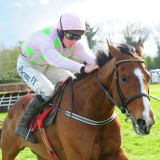 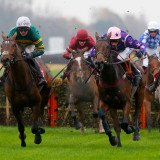 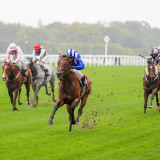 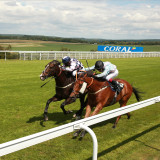