The Fairyhouse card on Sunday is superb, but from a punting point of view it is hard to oppose the three odds-on favourites in the big races.

Ballyadam (4-5), Honeysuckle (4-6) and Envoi Allen (2-13) will all be hard to beat but, even if they are not worth backing, they are more than worth watching on Racing TV.

As ever, four Sunday selections for you.

Jenny Candlish has her horses in fine form and she can bag another winner her.

This selection is premised on the likely favourite, Opine, being a doubtful stayer and Sure I’m Your Man being open to improvement over hurdles.

He was quite modest on the Flat but his hurdling debut at Bangor, when third, showed a deal of promise and aptitude for hurdling. He is likely to be about the 3-1 mark and with the favourite looking vulnerable he makes plenty of appeal.

Another Jenny Candlish horse to conjure with here.

He has a chance of upsetting the short-priced favourite, who fell heavily on his chasing debut when very tired.

By contrast, Cheddleton shaped encouragingly when fourth to Gumball at Uttoxeter and has potential to improve in this sphere. To some degree we are relying on Highway One O Two not translating his good hurdles form over the larger obstacles, but his initial negative experience over fences may well see him vulnerable here to a decent horse from an in-form yard.

It is fascinating that Willie Mullins has decided to up this horse markedly in trip in this ultra-competitive handicap chase.

Voix Des Tiep was a decent hurdler and although let down by his jumping at times has shown ability over fences.

He is better than the bare result last time out when eighth at Punchestown, where he went on with four to jump before getting tired and weakening.

That was his first run for nine months and he was entitled to need it. He will strip fitter here. The big question is whether he will stay this 3m5f trip? However, at 20-1 I am prepared to take a chance.

J P McManus looks to have something of a stranglehold on this and can take it with Drop The Anchor, who might well have won last time out but for being brought down.

That race at Down Royal went to Cayd Boy, who is in the field again today, but Drop the Anchor has a 9lb pull in the weights that barring accidents should allow him to turn the tables.

A strongly run race is ideal for him, as he is a strong stayer at 2m, and the pace scenario here looks ideal. He rates as a strong play. 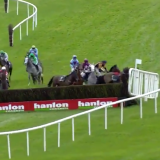 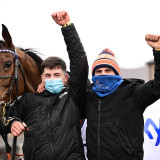