Nearly Perfect appears far from certain to take up his engagement in the Mccoy Contractors Civil Engineering Classic Chase at Warwick.

Neil King’s seven-year-old is as short as 7-1 in the betting for Saturday’s Grade Three feature following impressive wins at Wetherby and Wincanton last month.

However, the Wiltshire-based trainer has warned his charge could yet sidestep the three-mile-five-furlong contest in favour of a less taxing option the following week.

King said: “I’m not sure about Nearly Perfect. He probably won’t run (at Warwick). Don’t hold me to that, but my feeling at the moment is probably slightly against (running).

“He’s only a young horse and could go to Wincanton the following week.

“I’m just wondering whether we really want to go for a marathon just yet – he’s only just turned seven and I don’t want to over-face him.”

King also has stable stalwart Lil Rockerfeller entered in the Classic Chase, but he is set to stick to the smaller obstacles after running a fine race to finish second on his return from 12 months off the track at Newbury.

“Lil Rockerfeller is going to go to Market Rasen on Saturday,” the trainer confirmed.

“He is in good order. I’d have loved to have gone to the Classic Chase, but it looks a nice opportunity at Market Rasen, so it makes sense to go there.

“It would do him the power of good to get his head in front.” 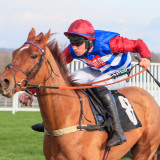