Racing TV ambassador Paul Mulrennan is expecting his mount in the Vertem Futurity Trophy at Doncaster to outrun his odds plus provides the inside track on his other mounts on Saturday.

Predictably things have started to quieten down, although I did manage to notch a winner for Lucinda Russell (Engles Rock) at Newcastle on Tuesday and I have a good book of rides there on Friday evening, kicking off with Major Snugfit (5.30pm) in the opener. He’s a versatile type, yet can also be a bit of a handful, so much credit is due to his trainer Rebecca Menzies for continuously preparing him well.

It’s great to pick up a ride in the Group 1 Vertem Futurity Trophy Stakes (3.15pm) at Doncaster on Saturday, and I do think that Hannibal Barca will outrun his projected odds of 50-1.

He was given a nice introduction to racing at Ascot (third) by Jamie Spencer before winning nicely under Ryan Moore at Salisbury (7f, soft).

With racing taking place at Doncaster on Friday, it could well be tacky soft ground there on Saturday, which certainly wouldn’t inconvenience my lad. He’s out of a Galileo mare (Innocent Air) and already appears to be crying out for this longer trip.

Luxembourg did the job nicely in the Beresford Stakes, and after finishing third to Native Trail in the Dewhurst, the form of Roger Varian’s horse Bayside Boy also looks good. Furthermore, Royal Patronage and Imperial Fighter are closely matched.

Regardless of the outcome in the Futurity, we’ve already seen enough of Hannibal Barca to state with some confidence that he’ll be an exciting three-year-old for Brian Meehan.

I won on Mot And The Messer at Ripon earlier in the season, and he’s a lovely little horse. He wears cheekpieces for the first-time in the Listed Virgin Bet Doncaster Stakes (3.50pm). He ran a good race when finishing fifth of 15 to Chipotle in the Two Year Old Trophy at Redcar, so it’s nice to get back aboard and hopefully the cheekpieces will help him concentrate. There’s no denying it’s a deep race, with five of his six rivals last-time winners, including stablemate Flaming Rib who is on a four-timer.

Julie Camacho’s Makanah (4.20pm) has been a very good horse to me over the years, and he ran a helluva race the last day when finishing a close third in the Flying Scotsman Conditions Stakes at Musselburgh. He was previously an unlucky loser (met trouble and beaten a short-head) there. He’s had his wind done since that race; he’ll like the ground at Doncaster and is another who is a surprisingly big price.

Makanah was unlucky not to finish closer last time out

David O’Meara saddles three runners – also Orbaan and Cold Stare - in the Scott Dobson Memorial Handicap (2.05pm), and I must confess that I don’t know a great deal about my mount Tammani. The stable haven’t had him for long but he has won on heavy in France, so the ground won’t be a problem. Looking back over his form, he actually contested the Vertem Futurity Trophy as a juvenile (ninth to Kameko at Newcastle), and after a spell in France is attempting to re-establish himself back on these shores.

Plans for next week

I’ll be endeavouring to pick up a number of rides with a couple of northern fixtures scheduled (Redcar and Catterick) for the early part of the week, and being relatively close to home during October half-term will also relish spending some quality family time with Adele and Scarlett. 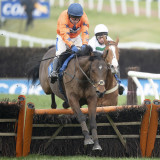