Paul Mulrennan Column: hoping for six of the best at Carlisle

Racing TV ambassador Paul Mulrennan gives us the inside track on his Saturday rides plus shares his thoughts on the Coral-Eclipse.

Mulrennan and Detective click at Carlisle this time last year

I have a strong book to look forward to at Carlisle on Saturday evening, with six rides for six different trainers.

Hougoumont makes his debut for Julie Camacho in the six-furlong novice (6.20pm). His dam was a speedy type, but we’ll take whatever happens here as a learning curve for the future in a race where Nigel Tinkler’s Lakota Blue has an official rating of 91.

The five-furlong Class 6 handicap has divided. I’m booked to ride Stanley Snugfit for Rebecca Menzies in Division 1 (6.50pm) but he’s not a guaranteed runner. We’ll have to wait and see what happens with the weather.

In Division 2 (7.20pm) I take the ride on Sugar Baby for Peter Niven. He hasn’t run too many times on turf but did post a pleasing comeback when fifth of ten at Thirsk. That form received a boost with the fourth-placed Boudica Bay winning at Haydock on Thursday.

He should improve for that race, and I’d be hoping that the track at Carlisle will suit, so he’d have a reasonable chance.

Paul Midgley’s Dr Rio (7.50pm) ran a solid race at Beverley recently – run down late by a fast-finisher – so you’d imagine that dropping back in distance by a furlong will suit.

It’s great to get back on Dianne Sayer’s Detective (8.20pm). Circumstances have dictated that I’ve been unable to ride him this calendar year, but he’s a versatile little horse who has been in fine fettle over a range of distances. His form figures at Carlisle are unbelievable; he loves the place.

Finally, Archie Watson’s First Snowfall (8.50pm) should take a bit of beating in the concluding Maiden Fillies’ contest. She ran well on her debut in a decent novice at Chelmsford, and she’s bred to stay further, so the extra furlong at Carlisle should suit.

Eclipse promises to be a cracker

Racegoers are in for a treat at Sandown on Saturday with the Coral-Eclipse attracting a stellar field.

It’s an unbelievable race with the impressive Brigadier Gerard Stakes winner Bay Bridge, who did nothing wrong at Royal Ascot, locking horns with Vadeni, Mishriff, Native Trail and company.

Mishriff boasts a tremendous CV with David Egan stating this week that he’s happy with his mount. He encountered softish ground when third last year, so assuming the rain stays away, the conditions should be more favourable. You’d imagine this race has always been his intended target.

Native Trail competes beyond a mile for the first time. The Tattersalls Irish 2,000 Guineas winner is out of an unraced mare from a 1m2f winning half-sister to a Dewhurst Stakes winner. Visually, he gives the impression that he’ll stay ten furlongs and, given his high-class level form, that’s enough to convince me he’s the likeliest winner.

However, with just six runners, jockeyship could play a crucial role in the outcome, and in Marquand, Moore, Doyle, Egan, Buick and Soumillon, there’s an equally strong cast in the saddle. In a race where it’s possible to make a logical case for each individual horse, tactics often make the difference.

Joe Fanning took a nasty fall in the early stages of a race at Musselburgh on Wednesday. There’s nothing worse than taking an unexpected tumble, so I’d like to the opportunity to wish Joe well. He’s a fit lad, so hopefully he’ll soon be back in the saddle after receiving the results of his scan.

It was fantastic to hear that Joshua Moore is on the mend after his Haydock fall in April, and hopefully he’ll go onto make a full and speedy recovery. We’ve all been thinking of the Moore family and hoping and praying for such a positive news update. 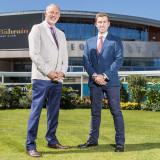