Ruth Jefferson will consider festive options in Britain and Ireland for Waiting Patiently following his excellent effort in defeat in the Betfair Tingle Creek Chase at Sandown on Saturday.

The eight-year-old looked a potential superstar after beating Cue Card in the 2018 Ascot Chase, but little went right for Jefferson’s pride and joy last season.

He was unfortunate to unseat Brian Hughes after being badly hampered by the fall of Bristol De Mai in the King George VI Chase at Kempton on Boxing Day, while he was firmly put in his place by Cyrname at Ascot and Min at Aintree after the turn of the year.

However, he looked much more like his old self when charging home to finish a close-up third behind Defi Du Seuil and Un De Sceaux on his weekend reappearance, offering plenty of hope for the remainder of the campaign.

“He seems fine. He’s come out of the race well and there are no problems,” said Jefferson.

“He ran a very good race. I don’t think he was outpaced early on, I just think they got first run on him more than anything.

“We didn’t have a lot of luck with him last year, so it was nice to see him running like the horse we thought he was.”

Waiting Patiently is entered in the Grade One Paddy’s Rewards Club “Loyalty’s Dead, Live For Rewards” Chase at Leopardstown on December 27, with the Ladbrokes Desert Orchid Chase at Kempton on the same afternoon an obvious alternative.

Jefferson added: “He’s entered at Leopardstown and there’s the Desert Orchid at Kempton. We’ll see how he is and what the ground is like and go from there.

“If he’s right, he’s right, and if he isn’t, he isn’t. There’s no panic to run him, but at the same time we’re not going to wrap him up if he’s in good form, as he does like soft ground – I think ground is more important to him than trip, to be honest.

“If we’re happy with him he could run somewhere over Christmas, but we’ll just have to wait and see.” 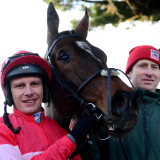